In the quest of the Tijanniya Muslim Council of Ghana to find vocations to its teeming youth, it has intensify its collaboration with egencies and organisations among other institutions, A delegation led by the Spiritual leader and President were at the Italy embassy for a familiarisation meeting. 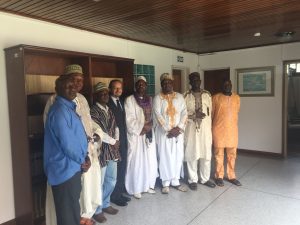 A national executive Sheikh Imam Mutawakilu Iddriss gave narration of the vision, mission, structure and activities of the Tijaniyya Council. According to him the council remains focus in propagating Islam, Tariqa Tijaniya, ensuring peace and co-existents with all other members of the religious divide.

He added that assisting the youth to acquire technical and entrepreneur skills is a preferential module on their agenda. The Spiritual leader and President of Tijanniya Muslim Council of Ghana Sheikh Khalifa Abul-Faidi Abdulai Ahmad Maikano commended the ambassadors for making time out of his busy schedule to give audience to him and his entourage.

He prays the collaboration between the Tijaniya council and the embassy will go a long way to benefit mankind. He reiterated the fact that the Tijaniyya Sufi order sdo not discriminate among members of the other religion but sees everyone as servant of God. On his part the ambassador to Italy Mr Giovanni Favilli assured the council of his support where possible.

He congratulated his eminence Sheikh Khalifa and the Council for the good work they are doing. He advised them to continue to be at peace with other religion which he says bring about development.