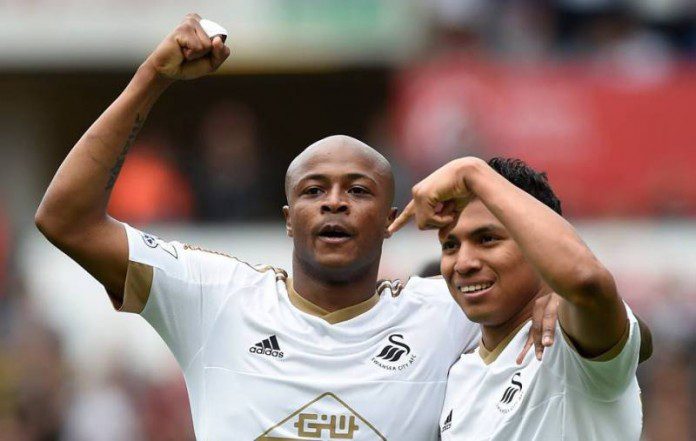 Ghana ace Andre Ayew perpetuated his dominance among Ghanaian players abroad by scoring on a second straight week for Swansea City in the English Premier League over the weekend. The 25-year-old also entered into the record books.

Young striker Eugene Ansah also scored a fantastic low drive for Lokeren in Belgium while John Antwi hit a double brace on his debut Al Ahly in the Egyptian Cup.

There were also goals for Afriyie Acquah and Robin Quaison in the Italy?s Coppa Italia while Kevin Luckassen also scored in Czech Republic.

Kingsley Sarfo also got on target in the Swedish lower-tier league for Sirius while Abdul Majeed Waris and Gideon Jung made their debuts in the French Ligue 1 and German Bundesliga respectively.

GHANAsoccernet.com?s Players Abroad pundit El Akyereko Frimpong has a comprehensive lowdown on how Ghanaian stars fared abroad over the weekend.

Striker Jordan Ayew held down his starting place and played full throttle as Aston Villa succumbed to a 1-0 home loss against Manchester United at the Villa Park.

Defender Jeffrey Schlupp reached a century of appearances for Leicester City who coasted past West Ham United with a 2-1 win. The German-born versatile attacker lasted the entire period of the game for the Foxes.

Andre Ayew became the first player to score in both of his first two appearances in the Premier League after Eric Dier and Diego Costa after netting a superb header against Newcastle United to aid Swansea City to a 2-0 win.

Youngster Bernard Mensah could not make the Watford squad for their 0-0 draw with WestBromwich Albion.

In the Championship, there was no place in the Birmingham City squad for Koby Arthur when they drew 2-2 at Burnley.

Youngster Andrew Osei-Bonsu was not in the MK Dons team when they lost 1-0 against Preston North End.

Winger Albert Adomah was in good form for Middlesbrough when they won 3-0 against Bolton Wanderers.

Tariq Fosu could not make the Reading squad for their 0-0 draw with Leeds United.

In the League Two, French-born Ghanaian forward Kevin Osei came off the bench to play for Carlisle Town when they drew 4-4 with Cambridge United. Derrick Asamoah was unused Carlisle.

Former AS Monaco starlet Dennis Appiah was in impressive form for Caen who posted a narrow 1-0 win over ten-man Toulouse.

Youngster Yaw Yeboah could not make the Lille squad when they held AS Monaco to a 0-0 draw on Friday.

Abdul Majeed Waris marked his debut for Lorient in the Ligue 1 when they drew 1-1 with Bastia on Sunday.

Dutch-born Ghanaian starlet Kenny Tete was in full-time action for Ajax Amsterdam when they posted a 3-0 victory over Willem II.

Defender Johann Kappelhof played in central defence and was booked for Groningen when they lost 2-0 at PSV Eindhoven on Sunday.

Would-be Ghanaian attacker Elvis Manu warmed the bench for Feyenoord in their 2-0 win over Cambuur.

Starlet Rodney Antwi could not make the FC Utrecht 18-man squad for their 1-1 draw with Heerenveen.

Attacking midfielder Shadrach Eghan warmed the bench for FC Twente when they lost 4-1 to ADO Den Haag. Manchester City loanee Thomas Agyepong missed out of the game due to injury.

Marcel Appiah was red carded in 55th minute while in action for NEC Nijmegen who lost 3-0 against Heracles Almelo.

In other games, Dutch-born Derrick Luckassen watched the entire proceedings from the bench as his AZ Alkmaar side held Excelsior Rotterdam to a 2-2 draw. Ghana U23 attacker Raymond Gyasi could not make the squad for the game.

Johnathan Opoku played 89 minutes for ten-man VVV Venlo who slipped to a 2-1 home loss to his former side Oss.

Genk managed a narrow 2-1 win over Westerlo. Injured midfielder Bennard Kumordzi watched the game from the stands while Dutch-born Ghanaian defender Mitch Apau flourished in defence for Westerlo despite the defeat.

Former Liberty Professionals youngster Eugene Ansah came off the bench to cushion the lead for Lokeren who beat KV Mechelen 2-0 to claim their first win of the season.

In the Bundesliga, 18-year-old midfielder David Atanga came off the Red Bull Salzburg bench in the 60th minute to play part of their 2-0 victory over Altach on Saturday. Midfielder Reinhold Yabo missed the game with injury.

In the second-tier league, Ghana U20 goalkeeper Lawrence Ati-Zigi conceded four goals as Wacker Innsbruck hammered his Liefering side 4-1. Midfielder Ralph Dwamena climbed off the bench in the 57th minute to play for Liefering.

There neither Francis Dickoh nor Daniel Amartey in the Midtjylland and FC Copenhagen squad as they shared the spoils in a 0-0 draw.

Danish-born midfielder Kevin Mensah was unused by Esbjerg who posted a 2-1 win over Nordsjaelland.

German-born Ghanaian starlet Gideon Jung marked his Bundesliga debut form Hamburg SV as they got battered 5-0 by Bayern Munich in the season opener.

Daniel Opare was not in the Augsburg squad for their 1-0 home reverse against Hertha Berlin.

In the Bundesliga II, Swedish international of Ghanaian descent Joseph Baffo and Philemon Ofosu-Aryeh were both in action for Eintracht Braunschweig who lost 2-0 at home against RB Leipzig.

Stromsgodset slipped further away from the top-four place after losing 2-1 at Aalesund. Midfielder Mohammed Abu was a full-timer for Stromsgodset but Bismark Adjei-Boateng sat on the bench.

In other games, winger Ernest Asante glittered for Stabaek and helped them to a 3-2 win over visiting Lillestrom. His Ghanaian compatriot Kamal Issah missed the game.

Midfielder Aziz Tetteh was replaced before the resumption of the second-half by Lech Poznan who suffered a 2-1 loss at Zaglebie.

Spanish-Ghanaian Inaki Williams Dannis watched from the stands as his Athletic Bilbao side demolished Barcelona 4-0 in the Spanish Super Cup on Friday.

Midfielder Thomas Partey played the entire duration of the game for Atletico Madrid who beat Cadiz on penalties in a friendly game.

Defender Jerry Akaminko was not in action for Eskisehirspor who lost 2-0 against giants Fenerbahce.

In the second-tier league former Ghana U20 defender Joseph Attamah was in full-time action for Adana Demirspor who beat Karsiyaka 2-0.

Striker Kwame Karikari played 84 minutes for Balikesirspor but could not score against they drew 0-0 with Gaziantep BB.

American international of Ghanaian descent Gyasi Zardes was the star-man for LA Galaxy as they beat FC Dallas 2-1.

Midfielder Gershon Koffie was in a full-timer for Vancouver Whitecaps in their 4-3 defeat at Kansas Sporting City.

Former Ghana U20 pair of Francis Narh and Derrick Mensah were both in full time action for Banik Ostrava who lost 2-0 at Zlin in the Croatian top-flight.

Kevin Luckassen scored to earn a point for Slovan Liberec as they drew 1-1 with Jablonec.

Swedish international of Ghanaian descent Robin Quaison scored the winner for Palermo when they won 2-1 against Avellino in the Coppa Italia on Saturday.

In other games Black Stars midfielder Emmanuel Agyemang-Badu played 87 minute for Udinese who posted a 3-1 win over Novara.

Afriyie Acquah scored in the 33rd minute for Torino who trounced Pescara 4-1.

Samuel Inkoom was booked in the 92nd minute and played the entire match for Boavista who held Vitoria Setubal to a 2-2 draw with ten men.

Rio Ave held Belenenses to a 3-3 draw at their own backyard. Ghanaian midfielder Alhassan Wakaso played the entire match for Rio Ave in the top-flight.

Black Stars midfielder Rabiu Mohammed was booked in the 94th minute when his Kuban Krasnodar side lost 1-0 against visiting Rubin Kazan who had no Wakaso Mubarak in their squad.

Former Ajax Amsterdam youngster Prince Buaben suffered an injury while in action for Heart of Midlothian who won 2-1 at Ross County.

Former Liverpool starlet David Amoo was a full-timer for Partick Thistle who drew 2-2 with Kilmarnock. Abdul Osman missed the game for Partick.

Malmo FF coasted to an impressive 2-0 win over Gefle IF. Ghanaian midfielder Enock Adu Kofi and Kwame Bonsu both started the game for Malmo and Gefle but were both replaced in the second-half.

Sam Mensah missed Orebro?s 1-0 loss at Sundsvall due to injury.

Elsewhere Ghanaian pair of Mohammed Abubakari and Nasiru Mohammed played the entire game for BK Hacken who were battered 4-0 by local rivals Goteborg IF.

In the second-tier league former Asante Kotoko midfielder Yussif Chibsah returned from a three month injury lay-off to play for GAIS when they won 3-2 against Varbergs. Former Right to Dream Academy boy Thomas Boakye was in full-time action for Varbergs.

Still in the second-tier Kingsley Sarfo scored a 59th minute opener for Sirius who beat Mjallby 2-1.

Samuel Afum was in action for Young Boys but could not find the back of the net in their 2-1 win over Kriens in the Swiss Cup.

Ebenezer Assifuah also played for FC Sion and helped them to a 2-0 win over Brunnen.

Former Asante Kotoko youth team player Obeng Regan was in full-time action for Cukaricki who succumbed to a 1-0 home defeat against an unlikely Radnicki Nis side.

Ghana: How Exchange Rates work & how to get the best one

Quaye, Ansah Others On Show At Bukom Boxing Arena On Saturday