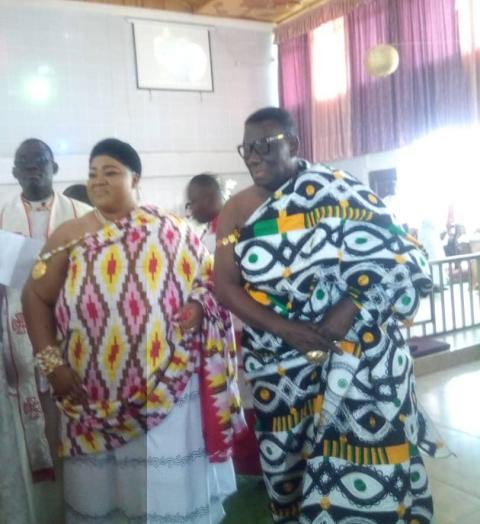 Nana Agyakoma Difie 11, the Queen of Asante-Mampong, has launched the Nana Difie Foundation, a pro-educational support programme targeting underprivileged children, within the traditional area and its environs.

The initiative, which coincided with the 20th anniversary celebration of her enstoolment as the Queen of the traditional area, is designed to broaden the scope of child education in order to improve the literacy levels of school children for the benefit of the society.

The Foundation has already mobilised substantial number of educational materials, including; 25,000 exercise books and some mathematical sets for distribution to pupils and students.

Additionally, an award scheme was being instituted under the initiative to offer incentive packages to beneficiary children with exceptional academic qualities.

Addressing a ceremony at Asante Mampong, Nana Difie pointed out that empowering the Ghanaian child was her priority.
The ceremony graced by Nana Osei Bonsu II, the Mamponghene, brought together educationists, traditional authorities, government officials and child rights activists.

Enstooled on February 07, 2000, the Queen, known in private life as Nana Yaa Nkansa Dwamena, initiated programmes aimed at promoting women and child development, tailored to uplift the living standard of the people, especially those living within the traditional area.

Nana Difie assured that she would continue to critically look at bringing on board all identifiable groups to lend helping hands to issues affecting the growth of Asante-Mampong in the areas of education, environmental sanitation, health, skills acquisition and job creation.

The Asante Mampong Queen appealed to civil society organisations to be vocal on subjects affecting the development of the girl-child, saying they should collaborate with traditional authorities to end child marriages and abuses.

Her Foundation, she said, had initiated the construction of a six-unit classroom block at Bresua near Asante-Mampong, and called for support for its early completion to promote basic education in the area.

Nana Agyakoma Difie disclosed that there were plans to establish an Alternative Dispute Resolution (ADR) Centre to facilitate the amicable adjudication of disputes in the traditional area.

Daasebere Osei Bonsu II, Paramount Chief of the Asante-Mampong Traditional Area, lauded the Queen for bracing the difficulties and challenges associated with her reign in the last two decades.

The occupant of the Silver Stool affirmed the unflinching support of the people for the Queen in the coming years.
The programme saw the inauguration of a seven-member board, chaired by Dr. David Nkansah, a Clinical Pathologist at the Kwame Nkrumah University of Science and Technology (KNUST).

The committee’s mandate among others is to manage the affairs of the Foundation.

Dr Nkansah encouraged the people to contribute in cash and kind in support of the Foundation.
The occasion was graced by the Ashanti Regional Minister, Mr. Simon Osei-Mensah.