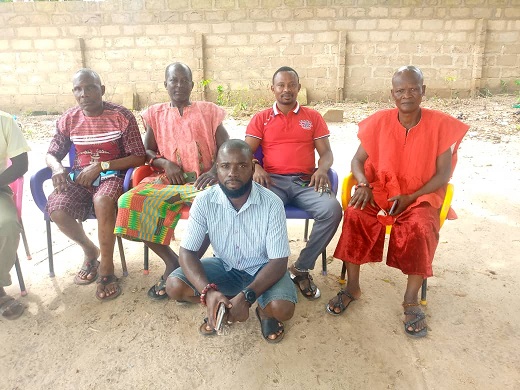 The Chief of Ashifla, Nii Okudzeoman I, and his people have denied claims by the self-styled Akutuase Chief, Nii Ofei that they have stolen their lands.

The chief and his people who are aggrieved by the allegation explained vividly that, the land in question was sold to an estate developing company.

They explained that Ashifla is a Divisional stool which has 14 stools under it, with the chief installing chiefs and leaders in other areas including Akutuase.

They indicated that one Naa Kwa who is aunt to Nii Ofei sold the said land to the developer.

He said, Naa Kwaanor who is the Head of Family, brought the estate developer to the Stool that she has given the lands to the company and the Stool endorsed that agreement with some documents.

According to Nii Oblija the Pokuaase Gyasetse the lands belonging to Ashifla have been entrusted into the care of Nii Okujioman I with all relevant documents at the Lands Commission at trying to that fact.

To then, they are not aware if the installer of Ofei is chief of Akutuase since Akutuase has a chief, Nii Sackey Akumia who is the rightfully installed chief of the area. According to them, the Ashifla lands are under James Town.

“We don’t know Ofei as chief. We are all aware that Akutuase has a chief so for Ofei to be holding himself as chief of Akutuase cannot be true,” they said.