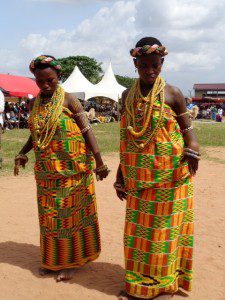 Avatime is a popular rice growing area with large expanse of rice fields, especially the brown rice and the annual festival used as a platform to highlight the cereal and its nutritional and economic benefits to promote its eco-tourism and raise funds for self-help developmental projects.

The Amu festival was instituted some few years ago, by Osie Adza Tepkor VI, Paramount Chief of Avatime.

This year’s event, which was on the theme: “Unity and Development in Avatime, through Brown Rice Culture and Eco-Tourism,” was used to raise GH₡ 150, 000 for a water project for the town.

Osie Tekpor noted that since the inception of the festival, the cultivation, consumption and utilisation of products from the brown rice had increased tremendously.

He said brown rice had become a means for accelerating socio-economic growth and employment generation among the women and youth in the area while market potentials and interest in it has risen.

The paramount chief, called on all the people of the seven towns to support the water project and invest in eco-lodges and other ventures to boost their tourism.

On education, he expressed worry over the increasing abysmal performance of children in the area in the Basic Education Certificate Examination.

Osie Tekpor expressed the hope that the establishment of a vocational/technical institute at Fume would prove opportunity for improved skills and trade development of the youth.

He also appealed to the Amedzofe College of Education to set aside admission quotas to student’s in the area to improve upon their educational levels.

Okusie Adzesi IV, Chief of Fume, expressed the hope that there would be support for the water project.

An exhibition and cooking contest of the brown rice was held as part of the festival and food prepared from the brown rice such as aprapransa, cake, pancake and others were displayed.