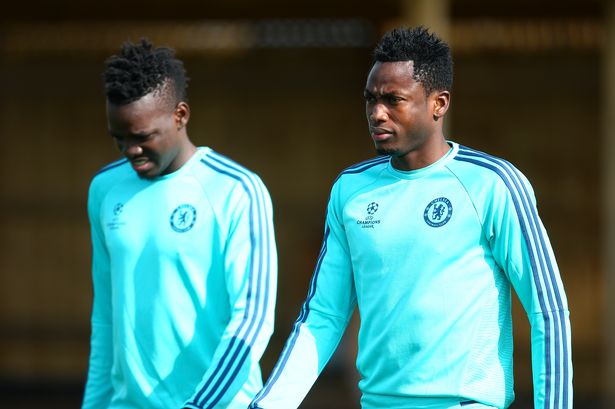 Baba Rahman, training with Burkina Faso international Bertrand Traore, has been tipped to follow in the footsteps of Carvalho at Chelsea

Ghana international defender Baba Rahman was dropped to the bench and watched the entire game from the dug-out as his Chelsea side held Ukrainian outfit Dynamo Kiev to a 0-0 draw on Tuesday night in the Uefa Champions League.

The 21-year-old made his Premier League debut for the Blues on Saturday afternoon at the Stamford Bridge as Jose Mourinho?s men defeated Aston Villa 2-0 and was expected to hold down his place in the starting line up.

But, French youngster Kurt Zouma was rather introduced in his place and played the entire game as Baba watched on from the bench.

Chelsea remain a point behind second-placed Dynamo Kyiv in UEFA Champions League Group G after the teams drew 0-0 in Ukraine.

Jos? Mourinho?s side hit the woodwork at the NSK Olimpiyskyi through Eden Hazard and Willian but will feel confident of going one better when the clubs meet in England, where Dynamo have never won, in a fortnight. That match has assumed greater importance for Chelsea after FC Porto took charge of the section by beating Maccabi Tel-Aviv.

The former Asante Kotoko defender made his debut in the competition in mid-September when he played full throttle for the Blues in their 4-0 thumping of Israeli side Maccabi Tel-Aviv.