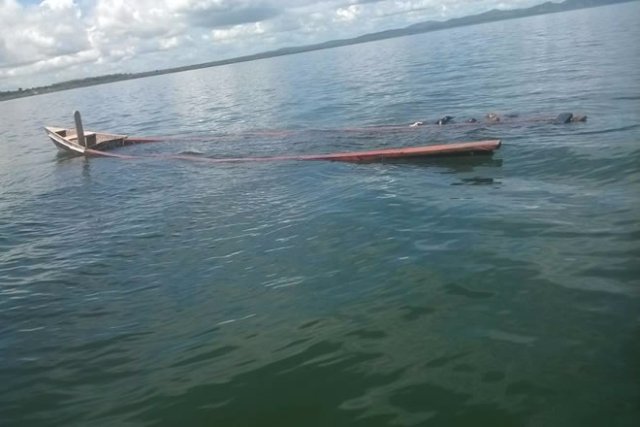 A team of navy personnel have moved in to rescue the market women whose boats were capsized on the Bui Reservoir last Friday June 30.
Official report from the Bui Power Authority (BPA), managers of the Bui Dam in the Banda District of Brong-Ahafo Region, however could not confirm the number of casualties.
But the Ghana News Agency (GNA) investigations revealed that eight of the market women were missing as at July 1.

The fishing boat, according to the BPA were conveying about 15 market women to the Jama market when it capsized at Accra town, a village upstream of the dam.
A statement signed by Fred Oware, the Chief Executive Officer of the BPA and copied to the GNA explained that the outboard motor of the boat developed a fault near the village.
“A mechanic used another fishing boat to carry another outboard motor to assist the distressed boat but it also capsized during the assistance due to strong winds on the reservoir at that time”, it added.

The statement indicated that the reservoir had been rising steadily as a result of the heavy rainfall in the area in recent times, and assured the BPA would inform the general public of any development as the navy continued on the rescue mission.
The Bui dam reservoir was created by the main and saddle dams and has a maximum capacity of 12,570 million cubic metres (10,190,000 acre-feet) of which 7,720 million cubic metres (6,260,000 acre-feet) is useful for power generation and irrigation.

Its maximum operating level is 185 metres (607 feet) ASL and the minimum, 167 metres (548 feet) ASL and covers a surface area of 440 square kilometres (170 sq miles) at its maximum level and 288 square kilometres (111 square miles) at the minimum level.
The Bui hydroelectric project was designed primarily for hydro-power generation. It however included the development of an irrigation scheme for agricultural development and presents an opportunity for enhanced eco-system and fisheries.
GNA