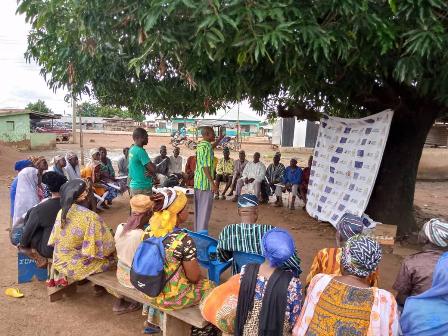 The Central Gonja District Directorate of the National Commission for Civic Education (NCCE) has organised a day’s community Durbar at the Fufulso community to sensitise members of the public on the negative impacts on corruption.

Mr Ayaala Abdulai, the District Director of the NCCE who addressed the participants urged them to desist from corrupt practices to promote national development.

The programme dubbed: “Anti-corruption, Rule of Law, Accountability Programme” (ARAP) is a planned activity designed to promote good governance in Ghana, and aimed at reducing corruption.

Mr Abdulai said the ARAP was also aimed at improving accountability and compliance with rule of law in the country.
According to him it was important for all and sundry to embrace the fight against corruption as it was a violation of fundamental human rights of citizens worldwide, and must be avoided.

Corruption, he said denied citizens their right to socio-economic development and increased poverty through high cost of living, and widened the poverty gap that could collapse existing systems that facilitated good governance in the public and private sectors.

Mr Abdulai observed that corruption promoted tension in all sectors of society, particularly growing agitations from all corners of the socio-economic divide. “This if not checked on time could be recipe for civil strife”, he stressed.

He said the public education intervention was a collaboration of anti- corruption institutions led by the NCCE and funded by the European Union
(EU).