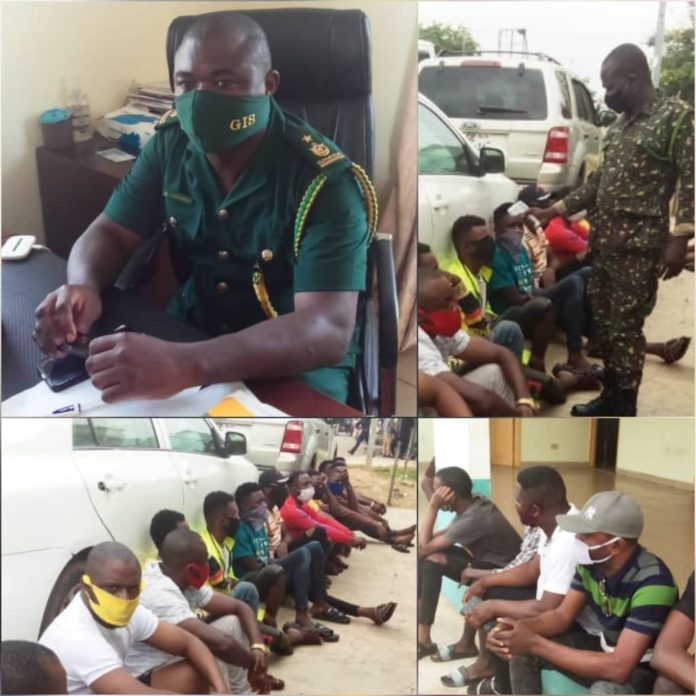 Customs Excise and Preventive Service (CEPS), Division of the Ghana Revenue Authority in the early hours of Tuesday arrested 24 Nigerians for allegedly entering the country through unapproved routes.

The immigrants, that included; five females admitted entering the jurisdiction and were Nigerians but refused to give reasons for their entry.

Chief Superintendent, Mr Shradrach Azangweo, South Tongu District Commander of the Ghana Immigration Service told the Ghana News Agency that the culprits would be moved to Aflao to assist in further investigations.

“None of them has been able to give a good reason for crossing into the country having breached our immigration laws and we intend to send them to Aflao for further investigations,” he said.

He said the immigrants had their temperatures taken with initial investigations and were likely to be quarantined at Aflao.

Mr Azangweo said the Immigration service would not allow them to continue their journey and they would all be repatriated after their COVID-19 status so that they do not endanger the lives of other people.

He said the culprits were assisted by ‘Okada’ riders and public transport drivers to the point of arrest.
He warned the drivers and Okada riders of serious repercussions for them, as they continued to facilitate the movement of the West African nationals into the country saying “you will endanger your life and other members of the public for possible infection of the virus.

“We will advise the public to support in this fight since the COVID-19 cases keep increasing, we ask everyone to be vigilant and report any suspicious characters of foreign extraction to us because we cannot do this alone.” he said.

Accident claims one life at Akatsi

Christians told to be advocates of child rights