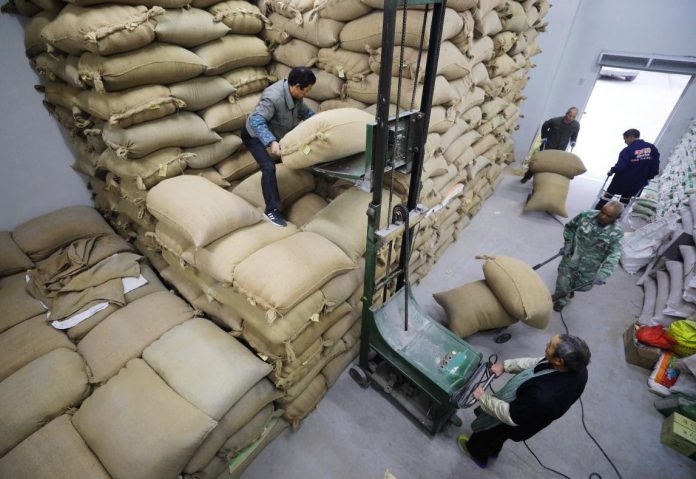 Food security is always vital for a large country with 1.4 billion people.

China’s government work report this year pointed out that the country will keep overall grain output above 650 million metric tons.

It is reported that China’s grain production maintained 17 consecutive harvests, and the total grain output has been kept above 650 million metric tons in the recent six years. At present, China’s per capita food output stands at 474 kilograms, well above the international safety line of 400 kilograms.

As long as China fulfills its responsibility in ensuring food security, it will have full control over the food supply, thus guaranteeing healthy economic and social development.

Technologies helped increase the unit production of crops, said Gao Xiangqiu, a deputy to the NPC, who’s also the head of a vegetable planting cooperative in Hailun, northeast China’s Heilongjiang Province. “Modern breeding and planting technologies improved not only the production of agricultural products, but also their quality,” he added.

Seeds are a foundation of agricultural modernization and key to ensuring food security. The government work report said that China will strengthen the protection and use of germplasm resources and the breeding and application of fine crop varieties, and strive to make key technological breakthroughs in agriculture.

At present, over 95 percent of crop areas in China are planted with independently bred varieties, and high-quality crop varieties make up 96 percent of the total. China is self-sufficient in major staple grain supply of wheat and rice.

Cultivated land is the essence of food production. According to the government work report, the standards for maintaining high-quality farmland will be raised, and irrigation facilities will be improved. China will enhance the protection of cropland, and resolutely stop any attempt to use it for purposes other than agriculture and specifically grain production.

NPC deputy Gong Dingrong, also mayor of Qianjiang, central China’s Hubei Province, noted that the total area of China’s farmland must stay above the red line of 120 million hectares. Besides, the country must implement a policy of balancing the occupation and replenishment of arable land, to practically protect farmland and ensure national food security.

In 2021, China is planning to build around 6.67 million hectares of high-standard farmland with guaranteed harvests in drought or flood, as well as stable and high yield, which will improve the quality of cultivated land by 1 to 2 grades in related zones, and average grain production by 10 percent to 20 percent.

Today, there are 207 million farmers across China who have contracted farmland, and smallholder farmers still make the major part of agricultural production

Gong suggested that the country enhance large-scale agricultural operation with new agricultural business entities, and agricultural service organizations shall help smallholder farmers solve the difficulties in grain production, so as to enhance the quality and efficiency of agricultural production.