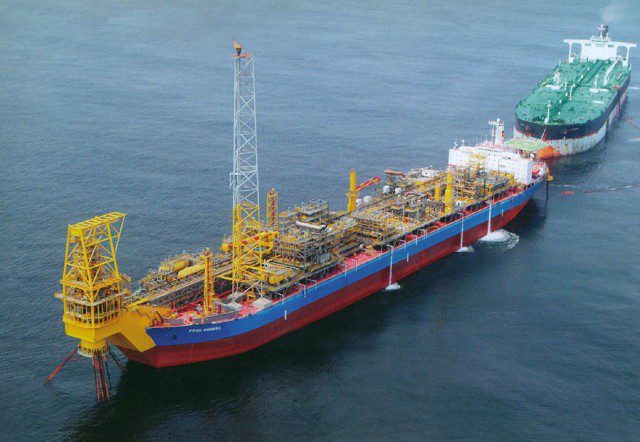 The vessel set sail for the Keppel Shipyard in Singapore for integration of the oil and gas processing modules. The third production vessel is being built to operate the Sankofa-Gye Nyame, gas and oil field to be operated by ENI and Vitol and expected to start gas production by February 2018.

Before this time, “The vessel had undergone conversion and life extension at the HRDD shipyard in China, to meet the 20-year life of the field, without dry-docking (moving to a shipyard) for maintenance. It is expected to be completed and set sail to Ghana in the first quarter, 2017,” the statement issued by GNPC late Sunday disclosed.

According to GNPC, the field is expected to produce 180 million standard cubic feet of gas daily, sufficient to generate approximately 1,100 megawatts of electricity. First gas is expected in February 2018, in addition to 30,000 barrels of oil daily, to be produced from August 2017.

“Sankofa is a game-changer in the development of Ghana’s gas industry. GNPC, the State institutions and the World Bank have been particularly effective in efforts to finalize the commercial and contractual arrangements for the project,” Alex Mould, Acting Chief Executive Officer (CEO) of GNPC stated.

Supported by the Bank of Ghana, GNPC, along with other state institutions, including the Ministry of Finance, Ministry of Petroleum to secure the project financing of 7.9 billion, which is the single largest ever foreign direct investment into the west African country.

“The manufacture of subsea production systems and facilities are well underway. Five deepwater wells have been drilled in the field,” the statement added.

Mould expressed GNPC’s pleasure in the significant progress chalked by the partners in just one year, conceding however that there is much more to do.

He pledged that the partners would continue to collaborate and in addition, provide access to use of project equipment, machinery and vehicles, to ensure successful delivery of the project. Enditem