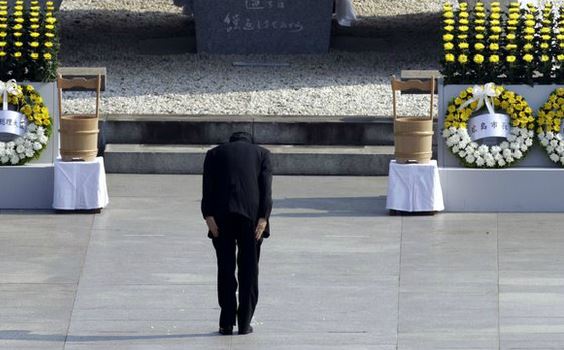 The unusual commemoration came 71 years after the United States dropped the weapon on the western Japanese city, killing 140,000 people, including those who died afterwards from severe radiation exposure. Regretfully, the formal collective wreath-laying ceremony conveyed a vague message to the world on what the senior diplomatic officials were commemorating — the killed innocent civilians in Hiroshima, hundreds of thousands of victims of other countries in World War II, the end of an aggressive war, or a charred Japan indulging in self-pity?

When Kerry and his counterparts, accompanied by Japanese Foreign Minister Fumio Kishida, visited the war memorial with somber looks, they probably did not know that Hiroshima had another disguised identity besides being the first city in the world that has ever been hit by an atomic bomb. It had a long history as an army city and was home to tens of thousands of soldiers as well as the headquarters of the notorious Fifth Division and the Second General Army.

Back in 1894, Japan launched a war of aggression against China. In September of that year, Emperor Meiji decided to temporarily move the command headquarters and the parliament to Hiroshima.

During World War II, Hiroshima acted as Japan’s most important base for munitions factories and barracks. The Hiroshima-based Fifth Division was the main force that caused the 1937 Marco Polo (Lugou) Bridge Incident and committed atrocities in China.

Historical documents show that choosing Hiroshima as the first and foremost target was not a random decision made by the United States, but a carefully calculated one that considered Hiroshima’s role and function in the aggressive war.

Japanese Foreign Minister Kishida, a native of Hiroshima, is presumably familiar with this chapter in history, but he apparently shunned the ignominious past of his birthplace while elaborating on the city’s war scars and people’s suffering.

Given the unspeakable pain it suffered, Japan should rationally have more remorse and reflection regarding the war. But it seems that incumbent Japanese Prime Minister Shinzo Abe has only used Hiroshima for public relations purposes instead of as a reminder of the evils of war.

On Aug. 6, 2015, when Abe attended a memorial ceremony in Hiroshima to mark the 70th anniversary of the U.S. atomic bombing, he once again stopped short of talking about Japan’s non-nuclear principles of not producing, possessing or allowing nuclear weapons on Japanese territory in his speech.

With regard to Japan’s excessive stockpile of weapons-usable nuclear materials, it is worrisome for the world that Japan may harbor clandestine nuclear designs behind its calm facade.

The bombings of Hiroshima and Nagasaki seven decades ago were examples in point of “Live by the sword, die by the sword.” Those who still expect an apology over the August 1945 bombing should first refer to Japan’s militarist past, of course, not the whitewashed Japanese textbooks. Enditem