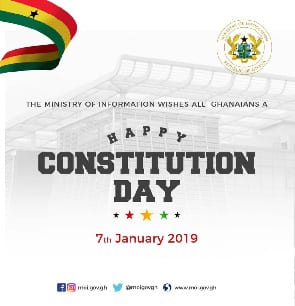 A section of Ghanaians has expressed their contentment about the Constitution Day to be celebrated on January 7.

To them, the Day, which would coincide with the swearing -n of newly elected Presidents, would give room for workers, more importantly, those in the government sector to fully participate in the event.

Mr Atta Eduah, an Evangelist, said so far as the new holiday would not add to the numerous ones but would scrap that of the July 1, it was in the right direction.

It would also enable Ghanaians to take some good rest after welcoming their newly elected President and Members of Parliament.

Mr Emmanuel Asante, a Private Sector worker said, the new Day would be an opportunity for people in that sector to break as most of them did not have time to rest as compared to their counterparts in the government sectior.

However, he was quick to add that more sensitisation needed to be done on it for people to understand its essence as many did not know much about the Day.

“A lot of our public holidays such as the Independence Day were losing its value in the sense that a number of the citizenry knew little about them,” Mr Asante added.

Nana Yaa, a businesswoman, said, “We do not know what Constitutional Day is, but I believe by the close of the celebration, Ghanaians would have been enlightened on it”.

On the contrary, Ms Adelaide Sowu, a hotelier, did not see the relevance of the holiday, “May be I have not done my checks well, but there is no country that has Constitution Day, as for the other holidays, fine but this one, no,” she expressed surprise.

Ghana needs productive hours and these numerous holidays can be channelled into productivity to promote growth in the Country, Ms Sowu stressed.
“Well, it is from above, so we will obey it,” she said.

Mrs Victoria Mantey, a teacher queried “Why that holiday because we have too many holidays already? For me January 7 in the academic calendar is already in the vacation period, thus, there is no need to rope in a holiday,” she stated.

She said, July 1, is still necessary because at that time, they would be in school and that break is cherished and cannot be scrapped for January 7.