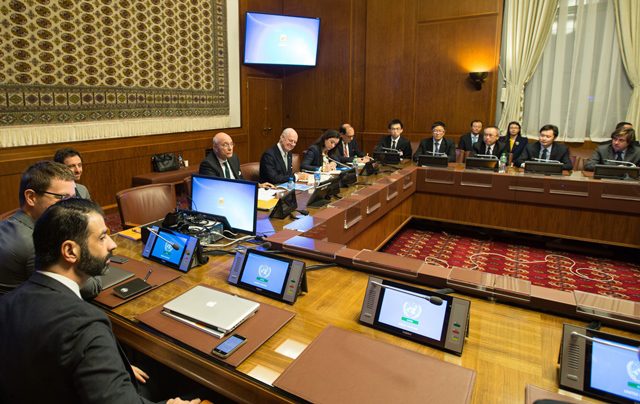 As the second week of UN-mediated Syrian talks prepares to get underway, warring factions are still at loggerheads over a number of issues though relative progress has been made since proximity discussions started on Monday.

Against the backdrop of a failed attempt last month, UN-mediated negotiations between the Syrian government delegation and its High Negotiations Committee (HNC) counterpart have this time managed to enter the substantive phase of discussions, albeit on a tentative level.

The context in which indirect talks are taking place is also very different to that of February when meetings came to premature standstill after the warring sides failed to see eye to eye on a number of issues.

A cessation of hostilities agreement implemented on Feb. 27 has since been accompanied by humanitarian relief with international partners set to reach 1.1 million Syrians by the end of April.

The issue of political transition, a central tenet of UN Security Council resolution 2254 mandating a peace process roadmap, has also been breached though much work remains to be done to bridge persisting gaps between opposing delegations.

Labelled “the mother of all issues” by UN mediator Staffan de Mistura, political transition has long been the major sticking point for sides whose diverging views may yet threaten the future of talks aiming to broker a political end to the crisis which has claimed the lives of over 250,000 people.

To date, the Saudi-backed HNC, the umbrella group for Syrian opposition factions locked in a five-year struggle with Syrian President Bashar al-Assad, has produced a substantive paper with points outlying their vision of governance and political transition.

Though the Syrian government delegation has yet to relay such an overview, it submitted a positional paper on the “basic elements for a political solution” on March 14 when talks kicked-off.

Discussions this week will focus on finding a list of principles to form the basis of a “minimum common platform” by March 24, after which a short recess is scheduled before talks resume in April.

While talks toy with substantive issues, external factors have also influenced the underlying dynamics of this year’s latest efforts to overcome a crisis which has been raging since 2011.

Taking many by surprise, the pullout of Russian forces which had been supporting al-Assad was cautiously welcomed by the HNC, and de Mistura lauded it as a positive development.

Concluding the first week of talks on Friday, the special envoy also welcomed the fact that the sides had not walked out and that excessive rhetoric threatening proceedings had been avoided.

He did admit however that significant differences of opinion prevail.

The HNC has repeatedly brought up the issue of humanitarian access to besieged Darayya and reiterated the government’s need to release detainees, an issue it considers non-negotiable.

The government delegation for its part has indicated that preconditions should be avoided as should foreign meddling in the country.

One factor uniting both factions is their staunch opposition to a divided Syria after Kurdish parties not invited to Geneva voted for federal rule in the north of the country earlier this week.

Both sides also have similar views regarding the Islamic State, which occupies vast swathes of Syrian territory, and the al-Nusra Front.

Building on such common ground and finding further points of political accord will be the difficult task vested upon de Mistura in the coming days as the need to reach an agreement becomes even more urgent if the sides want to avoid going back to war. Enditem