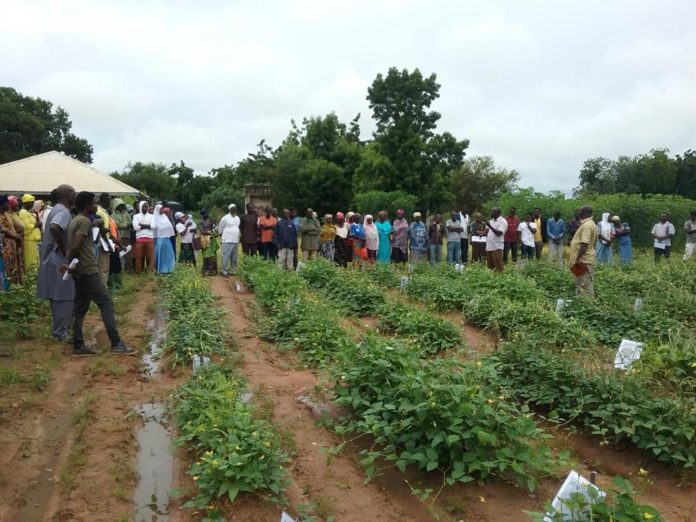 The Manga Station of CSIR-Savanna Agricultural Research Institute (CSIR-SARI) in the Binduri District of the Upper East Region has engaged 124 farmers and other stakeholders on selection of promising genotypes and production of seeds of improved cowpea varieties.

The participants were first given the opportunity to select their preferred genotypes out of 69 genotypes before two other varieties of improved cowpea known as ‘Wang Kae and Kirkhouse Benga’ that have been listed under the government’s flagship policy, ‘Planting for Food and Jobs (PFJ)’ were introduced to them.

The participants, made up of women and youth went to the field to assess the performance of the 69 cultivated cowpea genotypes planted in rows and were tasked to select their most preferred five rows.

That was done using a photo album of the seeds of each row, placed on the plots to enable the farmers to make an informed choice.

Under the USAID sponsored Innovation Lab for Legume Systems Research (ILLSR) project, Ghana through the CSIR-SARI is collaborating with the University of California Riverside in US, INERA in Burkina Faso and ISRA in Senegal to develop market-driven improved cowpea varieties for West Africa, using mature-markers.

Dr Francis Kusi, the Principal Investigator (HC-PI) of the project and a Senior Research Scientist at the Manga station of CSIR-SARI, in the Upper East Region, said the participants were invited based on one of the project’s objectives that involved testing the field performance of improved cowpea in support of variety release process.

The cowpea genotypes, according to Dr Kusi were being evaluated in the above partnered countries under the Innovation Lab for Legume Systems Research (ILLSR) project.

He said they were developed with the aim of building multiple resistance to root rot disease, Cowpea Aphid, striga and improving Drought tolerance.

To ensure that the most preferred genotypes were eventually released as varieties in the near future, Dr Kusi said his outfit would engage the participants from next year in “on-farm testing of their selected lines and also invite them to have a taste of them in different cowpea food types such as red-red, tubani, koose and waakye”.

He said CSIR-SARI had strategized to ensure that early generation seeds of those varieties were produced and made available to certified seed growers to produce and supply to farmers under the PFJ programme across the nation.

Dr Kusi expressed gratitude to the Minister of Food and Agriculture and his team of experts on the PFJ programme for selecting the two earlier released varieties for the government flagship programme.