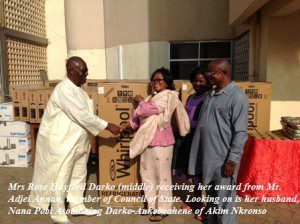 The Tema Metropolitan Assembly (TMA) has presented a special award to Mrs. Rose Hayford Darko, a retired correspondent of the Daily Graphic newspaper, for her hard work and credible reportage in the Metropolis over the years.

Mrs. Rose Hayford Darko, who is the immediate past Tema Regional Correspondent of the paper, received a double door refrigerator and an undisclosed amount of money. This was part of activities marking the Senior Citizens Day celebrations in the Tema Metropolis.

Presenting the award, the Tema Metropolitan Chief Executive, Isaac Odamtten, said Mrs. Hayford Darko is a shining example of a selfless and dedicated journalist, who sacrificed her time and energy to make reporting interesting in the Metropolis. He commended the retired journalist for her contribution towards the development of the media landscape in the Metropolis.

Receiving the award, the retired Graphic Reporter thanked the TMA for recognising her good works, where she did her best to impact positively on society through media coverage. She advised the younger generation in the profession to have role models, and follow their activities as their mentors and avoid looking out for monetary gains, rather than doing the job.

?A good name is better than unfavourable gains, which would give you bad name,? she said. She thanked the management of Graphic Corporation Ghana Limited (GCGL) for giving her the opportunity to effectively practice her profession, which lasted for 33 years.

Mrs. Hayford Darko also thanked the Assembly for recognising her hard work and dedication to work over the years, and for bestowing on her an honour that shows she has been appreciated for all that she had done. The award makes Mrs. Rose Hayford Darko the first journalist to be honoured by the Tema Metropolitan Assembly.

She joined Graphic Corporation in 1978 as a Reporter by the name Rose Hayford. She worked for ten years, and rose through the ranks to the position of a Staff Writer. Within the period, she handled a page for women and children, which is now called the Gender Page. She was laterposted to head the Tema Region.? At this point, she resigned to explore other areas of the profession.

Mrs. Rose Hayford-Darko was also part of a team that developed a number of policy framework for the Assembly, some of which the institution continues to work with till date. Her penchant to explore more compelled her to leave the Assembly to have a taste of life in the electronic media.

Firstly, she went to manage Eastern FM, a Koforidua-based radio station, after which she left to work in the newsroom of Sunrise radio station, the Eastern Regional branch of the Ghana Broadcasting Corporation (GBC), also in Koforidua.

The former Tema Regional Correspondent of the Daily Graphic, once again, left the station and moved to manage Style FM, a privately-owned radio station in the Upper East Regional capital, Bolgatanga.

While managing the Bolgatanga-based radio station, she doubled as the Media Relations Manager for a private company, Setralinks Ghana Limited, which had Mr. Austin Gamey, a onetime Minister of Labour in the Jerry Rawlings administration, as its Board Chairman.

Source:? Richard Kofi Attenkah , The Chronicle
Send your news stories to newsghana101@gmail.com and via WhatsApp on +233 244244807 Follow News Ghana on Google News

Walter Rodney Recognized by the Guyana Government After 41 Years