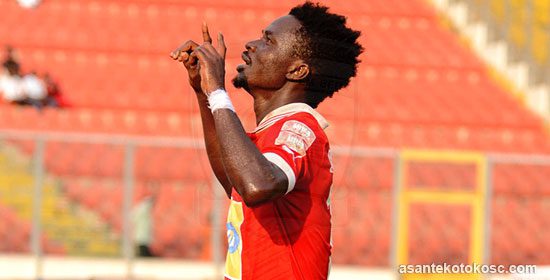 Asante Kotoko winger Richard Mpong says head coach David Duncan has the final say on his return to the starting line-up after coming off the bench to score a brace in their 4-2 win over BA United on Sunday.

Mpong has not had enough starts or come-ons especially in the second round of the ongoing First Capital Plus league.

?For now it all depends on the coach?, Richard Mpong told reporters. ?I will keep training. If he sees that the performance is good and calls for me, I will be glad; and if he doesn?t too and wants to continue using me as a substitute, I will take it like that. So let?s leave that to the coach.?

The winger did not celebrate his first goal. In fact it was the second that he raised his right hand and run to the supporters as his colleagues chased to mob him.

?The goal means a lot to me. For some time now I haven?t gotten the opportunity because those playing are doing well. I had to wait for this opportunity to come. I am happy because I came on in the second half to score two goals. I felt relieved and that was why I couldn?t celebrate the first goal.?