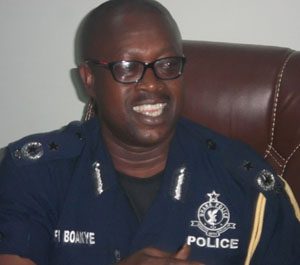 A 39-YEAR-OLD man died instantly when he was hit by a stray bullet which was accidentally fired from the rifle of a falling policeman on Wednesday morning.

The deceased, identified as Kwasi Opoku, was caught by a bullet which was fired by General Constable Ignatius Simon Kofi Torvi of Asonomaso Police Station.

The policeman was holding a gun as he hotly chased armed men who had threatened Kwasi Opoku and another person at a sand winning site at Sakrawonuo.

In the course of the chase, Constable Torvi slipped and whilst falling, he accidentally pressed on the trigger, killing Kwasi Opoku.

The deceased who was hit in the rib and arm, was rushed to the Ankaase Methodist Hospital where he gave up the ghost.

According to him, Kwasi Opoku and one Oduro Agyeman lodged a complaint at Asonmaso Police Station around 7:00 am on Wednesday.

He said the deceased told the police that six men who were wielding AK 47 rifles and pistols, had attacked them on their sand winning site at Sakrawonuo.

Two policemen including Constable Torvi then accompanied the complainants to the site to deal with the dangerous situation.

Immediately the six armed men saw the police, they took to their heels so the policemen pursued them to arrest and retrieve the weapons from them.

Unluckily for Constable Torvi, he slipped in the course of race and he accidentally pressed on the trigger which fired at the direction where Kwasi Opoku was standing.

ASP Tanko who looked morose over the sad issue said Constable Torvi had been detained by the police at the regional headquarters to assist in investigations.