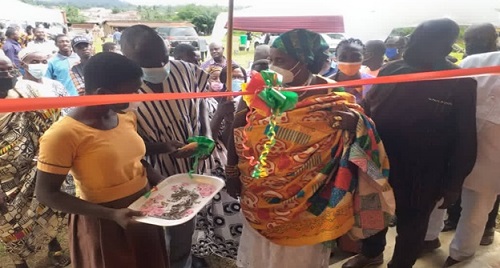 The projects, which were funded by the Ghana Education Trust Fund (GETFUND) and the Middle Belt Development Authority, included three-unit classrooms each at Dwendwenase and Morso as well as a six-unit classroom block at Asuboa.

Accompanied by the Municipal Chief Executive (MCE), Mr. Alexander Frimpong and the Municipal Director of Education, Ms. Elizabeth Davies, the Deputy Minister, commissioned the blocks at separate ceremonies attended by the chiefs and people of the various communities.

Mr. Asante-Boateng who doubles as the Member of Parliament (MP) for Asante-Akim South, said the projects formed part of the President’s vision to make quality education accessible to the Ghanaian child.

He said the New Patriotic Party (NPP) government had demonstrated its commitment to make education the fulcrum of national development by introducing the Free Senior High School Policy, which was by far the biggest social intervention in the education sector.

He mentioned the expansion of the National School Feeding Programme at the basic level of education and innovations in the loan and scholarship schemes for students at the tertiary level, as some of the initiatives aimed at improving access to education.

The government, he said, would continue to invest in educational infrastructure and called on the chiefs and people of the beneficiary communities to prioritise the maintenance of the facilities for posterity.

Mr. Alexander Frimpong, the MCE, said educational infrastructure was a critical need in the Municipality and applauded the Deputy Minister for the instrumental role he was playing to address the infrastructure deficit.

He said the Municipality received its fair share of development projects in the first term of President Nana Addo Dankwa Akufo-Addo and was hopeful that the second term would see massive improvement in educational infrastructure.

He called on traditional leaders and all stakeholders to support the governing party as it rolls out innovative and pragmatic programmes and policies to transform the lives of Ghanaians.

Ms. Elizabeth Davies, the Municipal Education Director, applauded the Deputy Minister and the MCE for their efforts towards raising the standard of education in the Municipality and assured that her outfit would make proper use of the classroom blocks.