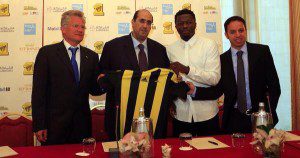 Ghana midfielder Sulley Muntari does not require surgery for the injury that has ruled him out of action for Saudi Arabian side Al-Ittihad Jeddah.

After going through some medical tests in Italy, it has been confirmed that Muntari ?s injury will not necessitate a medical surgery .

Doctors in Italy Muntari assessed the extent of his injury after he was forced off the field of play while playing for Al-Ittihad Jeddah last week Saturday.

The former AC Milan, 30, was forced off the pitch just 18 minutes into Ittihad?s 2-1 home reverse against Al-Faisaly at the Prince Abdullah al-Faisal Stadium.

Some rumours said that Muntari would need a medical surgery and a long period to recover from this injury .

However, press reports in Saudi Arabia denied the claim revealing that the Ghanaian player?s injury is not that bad.

Muntari will therefore be absent for some few weeks before to nurse the injury before being available for Al Ittihad.

He has played twice for Ittihad since arriving at the club on a free transfer from AC Milan.