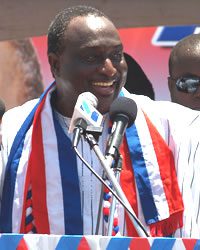 Get This, COSAK: Alan Is A Quitter!!!

They call themselves the Coalition of Students for Alan Kyerematen (COSAK). And they sign their names as National President, National Coordinator and National Secretary, respectively, as follows: Frederick Kumah, David Dankwah Mireku and Anita Amoakoh. I sincerely do not know what breed of students these youngsters suppose themselves to be, or would have others envisage them to be, in so presumptuously and adamantly presuming to make a winnable presidential candidate out of an irredeemably selfish and insufferably arrogant quitter and a liar (See “Nana Addo Is NPP’s Biggest Problem” Ghanaweb.com 6/14/14).

Yes, I said it. I have said it before; and I vehemently mean every letter and sound of the same – Alan John Kwadwo “Quitman” Kyerematen is a pathological and, apparently, a congenital liar as well. In 2008, with just four months before the December general election, Mr. Kufuor’s former Trade, Industry and PSI Minister summarily tendered the resignation of his membership of the New Patriotic Party, on the grounds that his supporters among the rank-and-file membership of the NPP were being unduly harassed by the supporters of Nana Addo Dankwa Akufo-Addo.

What made such move mischievously scandalous was the fact that Mr. Kyerematen had wasted nearly two months of the party’s precious electioneering campaign time making believe that his so-called problem with the Akufo-Addo faction of the party could be amicably resolved. In retrospect, it well appears that Alan Cash, as he is popularly known, was deviously buying time for then-Candidate John Evans Atta-Mills, flagbearer of the then main-opposition National Democratic Congress (NDC). Mr. Cash would rudely walk out on such revered party leaders as the now-late Mr. B. J. Da Rocha, and arrogantly claim that he had political ambitions that were far superior and transcended the collective interests of the entire membership of the? New Patriotic Party.

If this is not the most flagrant and inexcusable public display of arrogance on the part of any key member of the NPP, then I really don’t know what else is. And now, we are being told by these COSAK urchins that, somehow, Alan Cash is the most attractive NPP presidential candidate material since Mr. John Agyekum-Kufuor. My sincere and profuse apologies to “Mr. Tweaa!”

What really fascinates me, though, is the glaring, albeit evidently inadvertent, exposure of the running discursive fraud that is the sophistically held notion that, somehow, President Kufuor left the Osu Slave Castle with the overwhelming electoral support of at least 8 regions of the country in 2008 and that, somehow, Nana Akufo-Addo curiously managed to reduce this scientifically unproven measure of support to only two regions, namely, Asante and Eastern. This cynically sophistic view is widely held by the “Cashists,” or fanatical supporters of Mr. Kyerematen. And it is obviously intended to put Ghana’s former Attorney-General and Foreign Minister in the dimmest of political lights. Unfortunately for the “Cashists,” their prime choice of a presidential candidate is as dark as Stygian darkness, as far as presidential-candidate materials go.

Anyway, to hear the grossly misguided COSAK top-dogs and pit-bulls tell is, Mr. Kufuor clinched the presidency in Election 2000 with 6 regions of the country. By 2004, when an incumbent President Kufuor ran for reelection, or a second presidential term, his electoral clout had effectively been reduced to a mere 4 regions. What the foregoing obviously means is that within just four years of assuming the reins of governance, the former Rawlings Local Government Secretary had lost the support of a staggering 50-percent of his supporters. Statistically speaking, therefore, Nana Akufo-Addo, with overwhelming support of the voters of two of the most populous regions, in two consecutive elections, clearly appears to have significantly improved on Mr. Kufuor’s electoral track-record.

What the preceding also clearly indicates is that contrary to what his most ardent corner men and women would have the rest of the world believe, including, I must confess, yours truly, the on-job performance of the former president may very well have been grossly exaggerated, obviously because the former Chairman Jerry John Rawlings had performed epically badly during the 19 protracted years that he held Ghanaians virtually hostage by their throttle. Thus what the preceding observations clearly point to is that Nana Akufo-Addo may be the one consistently best-performing NPP presidential candidate in Ghana’s Fourth Republic so far.

The “COSAKERS” also inadvertently expose themselves for the novice political charlatans that they well may be. For instance, they laughably justify why they believe that a once Rawlings-trounced Prof. Albert Adu-Boahen had not deserved a second shot at the flagbearership of the New Patriotic Party in 1996 but, somehow, an equally Rawlings-defeated Mr. John Agyekum-Kufuor had deserved a second shot at the NPP flagbearership in the wake of the effective constitutional retirement of Uncle Diawuo’s former “revolutionary” boss.

If I had my own way, I would quietly and kindly advise these prematurely misguided “COSAKERS” (Does it sound like something sexually funny to you, dear reader?) to stay in school and not unwisely get themselves mixed up with the affairs of full-fledged adults until they are old and mature enough to do so, even as Dr. J. B. Danquah once kindly wrote to a student by the name of Master Owusu (if memory serves yours truly accurately), sometime in either the 1950s or early 1960s, when the latter rather earnestly, unwisely and prematurely presumed to take the side of Mr. Kwame Nkrumah in one of the Show Boy’s legion arguments with the Doyen of Gold Coast and Modern Ghanaian Politics.

Board Member, The Nassau Review