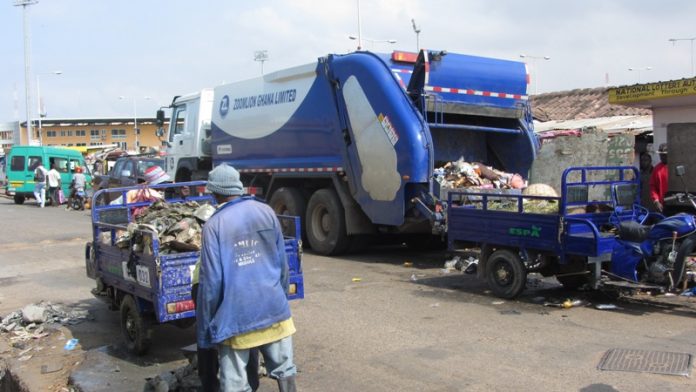 Drivers of the Central Regional branch of the Progressive Transport Owners Association (PROTOA) at Agona Swedru have given Zoomlion Company, a four- day ultimatum to collect piled-up refuse at lorry stations or face massive demonstration against it.

According to the drivers, uncollected refuse had piled-up at the station for two weeks prevented travellers from boarding vehicles to and from the station due to the repugnant stench emanating from there.

Speaking to the Media to register their displeasure, Alhaji Yakubu Fatawu, Regional Vice Chairman of PROTOA said all attempts to get Zoomlion to collect the refuse had proved futile.

He said the drivers fulfilled their part of the bargain by paying daily tolls to the Agona West Municipal Assembly and it was the duty of the Zoomlion to work as expected to avert any outbreak of chorea in the area.

Alhaji Fatawu said the executives of PROTOA had no choice but to instruct some drivers and their mates to put piled-up refuse into bags as an interim measure to minimize the stench and they will hit the streets if the situation was not salvaged.

According him, all efforts and complaints to the Agona West Environment Health and Sanitation Office and other authorities have fallen on deaf ears.

Alhaji Fatawu said the PROTOA has hailed the proposal of the government to invite more private Waste Management Companies to sign agreement with District, Municipal and Metropolitan Assemblies for refuse collection to ensure good sanitation in the country.

Mr Samuel Ampiah, Executive Member of PROTOA said filth had engulfed the area, posing serious health issues for the drivers and the general public and called for prompt action.

He reiterated the call on the government to expedite action to allow other private individual companies to come in to work with the assemblies to ensure competitiveness in waste management.