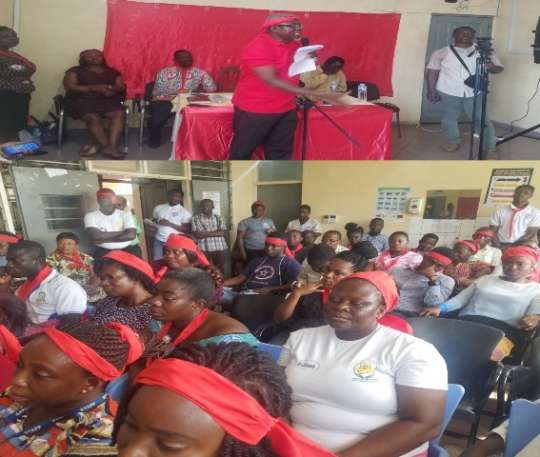 The Eastern Regional Branch of the Health Services Workers Union (HSWU) of the Trade Union Congress (TUC) has passed a resolution in support of a nationwide strike action as their outstanding grievances are yet to be resolved by the Ghana Health Service.

At an emergency meeting held in Koforidua, the members of the union dressed with red bands on their hands and head, massively declared their support in favour of a strike action.

In a resolution adopted at the meeting and read by Mr Mohammed Abeo, the Regional Industrial Relations Officer of the Union, the union said their employers have failed to abide by the collective agreement of the union signed in 2016.

He said their employers have refused to pay the market premium introduced for them during the implementation of the single spine pay policy.

Mr Abeo said during the transition of some of their members onto the single spine salary structure, some of the members suffered distortions in their salaries which has not been corrected despite the many efforts made by the union.

He said in 2017, some junior staff were promoted but were paid without market premium making them worse off and upon intervention by the union, the Ministry of Finance issued a letter for the market premium of the affected members to be paid with effect from March 2019 but this has not been done.

The union claimed that many of its members suffered wrong placement and are suffering loss of salaries.

The union observed that due to the challenges mentioned above and discrimination in the service, the unity that had characterized the work at health institutions has broken down.