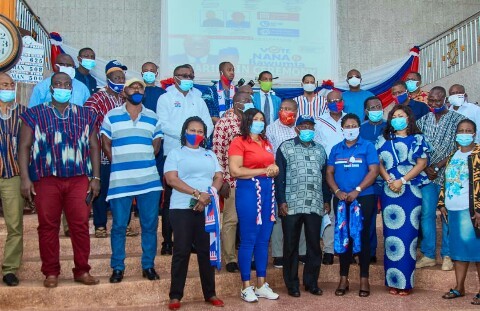 Lawyer Nana Obiri Boahen, the Deputy General Secretary of the New Patriotic Party (NPP), has urged members and supporters of the Party to eschew complacency and relentlessly canvass for more votes for overwhelming victory in the Election 2020.

Lawyer Boahen made the call when he inaugurated a 35-member regional campaign team of the Party for the Bono East at Techiman, saying that Party members and supporters had no alternative than to work harder than they did to win the Election 2016.

Among an inaugural team which included Messrs. Frederick Fredua Antoh and Henry Nana Boakye, the Second National Vice-Chairman and the National Youth Organizer respectively of the Party, Lawyer Boahen charged the team being led by Mr. Thomas Adu Appiah, the Regional Chairman to device effective mechanisms to spearhead the Party’s campaign to retain political power.

On his part Nana Boakye said the newly-created Bono East Region had gotten its fair share of the government’s intervention programmes and initiatives and therefore urged the team to capitalize on the numerous government’s achievements to win the hearts of many voters in the Region.

Mr. Kofi Amoakohene, the Bono East Regional Minister, described the successes chalked through the implementation of programmes and policies like the Free Senior High School Education, the Nation Builders Corp (NaBCo) and the Planting for Food and Jobs among others by the Akufo-Addo government as unprecedented.

Mr. Amoakohene who doubles as the Member of Parliament for Atebubu-Amantin therefore appealed to the electorate to vote massively for a resounding victory for the NPP in the forthcoming December 7 presidential and parliamentary elections.