West Africa alone, according to estimates, loses $1.3 billion a year due to IUU. 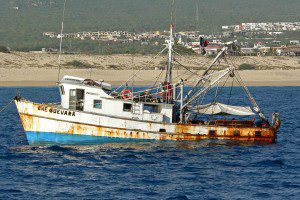 In East and Southern Africa, foreign factory ships are stripping countries not only of much needed revenue but also creating food insecurity.

Now campaigners are hoping that the Agreement on Port State Measures to Prevent, Deter and Eliminate Illegal Unreported and Unregulated Fishing (PSMA) will halt this drain in the natural resources of African countries.

The PSMA was initially tabled by the Food and Agriculture Organisation (FAO) in 2009 but only came into effect on June 5 after the required 25 countries appended their signatures to the deal in May, thus triggering a 30-day countdown to activate the first ever binding international treaty that focuses explicitly on illicit fishing.

Currently 29 countries, eight of which are in Africa (Gabon, Guinea, Mauritius,Mozambique, Seychelles, Somalia, South Africa and Sudan), and the European Union (as a member organisation) have signed the PSMA.

The Director-General of the FAO, Graziano da Silva, said: “This is a great day in the continuing effort to build sustainable fisheries that can help feed the world.

implementing it as of today.

“We invite governments who are yet to do so to join the collective push to stamp out illegal fishing and safeguard the future of our ocean resources.”

Caroline Kende-Robb, Executive Director of the Africa Progress Panel, of which Kofi Annan, the former Secretary-General of the UN is Chairman, welcomed the coming into operation of the PSMA.

“Africa’s rich coastal waters have long been plundered by foreign fleets, fishing illegally,” she wrote in a blog on the Panel’s website.

“Now global initiatives are gathering forces that aim to end such plunder – and protect the livelihoods of coastal communities.”

Indeed, the piracy off the coast of Somalia began as a well-intended initiative by local fishermen to protect the country’s coastal waters from rapacious foreign trawlers fishing illegally following Somalia’s descent into a failed state.

“No less than non-renewable petroleum and metals, Africa’s renewable fishery resources are a potential source of wealth and opportunity.

“It destroys the communities, who lose opportunities to catch, process and trade fish.”

The Africa Progress Panel itself raised the spectre of IUU to Africa in a 2014 report that urged governments to ratify the PSMA.

It is not that African countries have not been taking steps to counter IUU. For instance, the South Africans have been able to tackle Chinese vessels illegally fishing in South African waters.

In May the authorities impounded three foreign-owned trawlers on suspicion of illegally fishing squid.

In 2013, Mozambican authorities discovered that of 130 vessels fishing in the country’s waters only one was from Mozambique.

It is the reason why, back then when Mozambique was fast becoming the investment darling of the West, it invested in its own fleet – aimed at both exploiting its fishing reserves and protecting its sovereign waters – through three major deals.

The first contract was with a company called Proindicus to provide security services for oil and gas companies operating in the country’s exclusive economic zone off its coastal water.

The second was a deal by the Mozambique Tuna Company (EMATUM) whereby it acquired a commercial fleet of trawlers, longliners and patrol vessels.

The Mozambique Asset Management (MAM) deal was the third, by which it is providing maintenance of fishing fleet and other vessels. MAM also has a mobile maintenance vessel with a crew on board to carry out offshore

The deal also includes a Maritime Institute and the upgrading of two government-owned base sites in Pemba and Maputo for onshore maintenance, steel work and assembly work.

These investments were made with finance deals funded by international banks following full due diligence.

In common with other East African countries, Mozambique had found it difficult to convince international oil and gas companies and trade suppliers that its facilities, infrastructure and trade routes were of global standards.

These investment programmes were deemed by Mozambique as necessary in order to establish sovereignty over its own waters and natural resources after years of poaching and unlicensed exploitation.

At the time the contracts were signed in 2013 and 2014, Mozambique was being touted as the Qatar of Africa after the World Bank named the country as one of the fastest growing in the world.

Added to Mozambique’s attempts to protect its waters has been a permanent South African naval presence in the Mozambican channel since 2011 following a request from the Mozambican government after a Mozambican vessel, Vega 5, was seized by Somali pirates.

This anti-piracy agreement signed by the defence ministers of South Africa and Mozambique in Pretoria was described by the US embassy in Mozambique as “innovative”.

The US itself had donated coastal patrol boats to Mozambique between 2009 and 2011. For Mozambique, it not just a matter of protecting its fishing resources, it is also about safeguarding gas fields off the coastline that are operated by Eni and Anadarko.

The highly-prized fields are found in the Rovuma basin, between 20km and 50km of Mozambique’s coast and are expected to be flowing by 2019.

The country’s 2013 investment in its maritime capacity was motivated by this reason. The Africa Panel’s Kende-Robb praised some countries in Africa and beyond, such as Mozambique, Senegal, Seychelles, Indonesia and Argentine for “taking decisive action to monitor fishing in their waters”.

In the case of Mauritania, the government has launched a Fisheries Transparency Initiative that adds to multilateral efforts to tackle IUU. But preventive actions have not been enough for African countries. “Too often African nations lack the capacity to monitor and enforce compliance,” said Ms Kende-Robb.

“They are weakened by the inaction of states that are unwilling or unable to carry out their regulatory responsibilities.

“A registry of fishing vessels that sail under a flag of convenience should be established so African governments have the option of avoiding agreements with such vessels,” Ms Kende-Robb added.

This is what the PSMA aims to do: parties to the agreement are obliged to detect illegal fishing, stop illicitly caught fish from being offloaded and sold in ports under their control, and to globally share information relating to rogue vessels.

Ms Kende-Robb stressed this point in her blog: “As demand for fish increases worldwide, African waters are becoming a magnet for more and more fleets from around the world.

“To safeguard these fisheries for Africa’s people and for future generations, all countries should join the [PSMA] and the Fisheries Transparency Initiative.

“The world’s oceans are our common heritage.