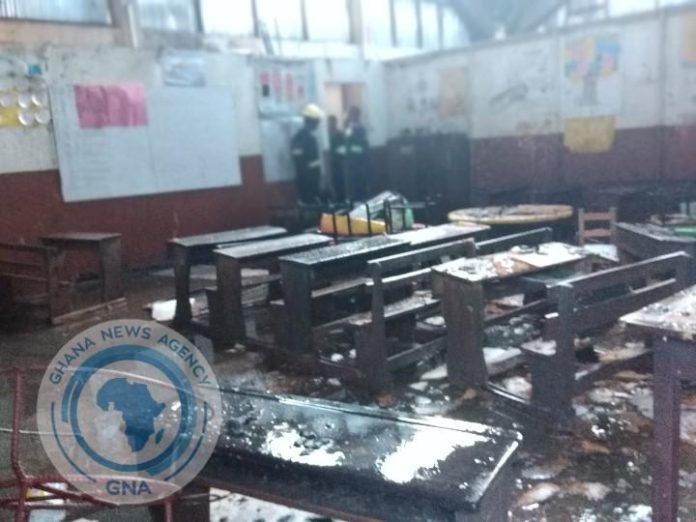 Fire gutted the Kindergarten of Sakumono School complex in Tema West on Thursday morning, destroying the roof and some furniture.

The fire, which started at around 5am, according to the school’s security man, Mr Samuel Dennis Tete, may have have been caused by an electrical fault in the Kindergarten classroom.

He said with the assistance of the residents, he called the Ghana National Fire Service which came shortly after.

Some residents who corroborated his account, told the Ghana News Agency (GNA) that they began doucing the fire even before the fire men got to the scene to contain the raging flames.

As off 6am when the GNA got to the scene, 10 fire fighters with two fire tenders were already at the scene to contain the fire and salvage the school’s property.

Madam Habiba Kotomah, Circuit Suppervisor, who was at the scene, said “the affected classroom which housed Complex One and Two kindergarten learners, was initially a shed but was later converted into classrooms.”

According to her, residents attempted to contain the fire with standby water from the school’s tanks but could not match the might of the flames with accompanying billows of thick black smoke.

Divisional Fire Officer Clement Adjei told the GNA that the cause of fire could not be immediately ascertained as preliminary investigations were being conducted.