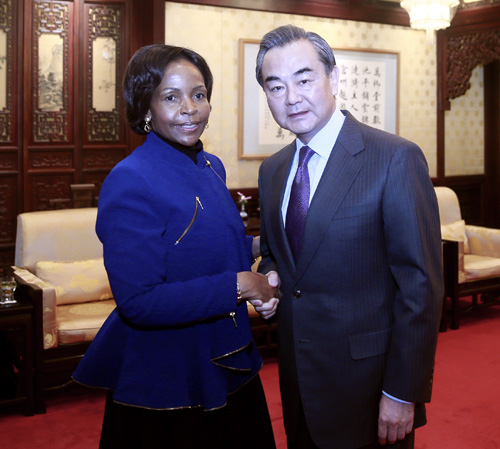 China will strengthen coordination with BRICS members including South Africa to prepare for the BRICS leaders’ summit.

Chinese Foreign Minister Wang Yi made the remarks during a meeting with his South African counterpart Maite Nkoana-Mashabane Sunday in Beijing.

The summit, to be held in southeast China’s coastal city of Xiamen in September, will not only contribute to common development of BRICS countries, but also promote more inclusive and balanced economic globalization, allowing the BRICS mechanism to play its role of rebalancing globalization, Wang said.

“Particularly on issues of major concerns and concerning their core interests, the two countries understand and firmly support each other, incessantly deepening their strategic partnership,” Wang said.

The two countries will hold the first meeting of the China-South Africa High-Level People-to-People Exchange Mechanism, according to Wang.

China stands ready to work with South Africa to push forward the implementation of the agreements reached during the 2015 Johannesburg Summit of the Forum on China-Africa Cooperation, so as to better benefit the two countries and the people, he said.

Nkoana-Mashabane said that South Africa regarded China as an important strategic partner and is ready to deepen political and strategic mutual trust, strengthen coordination in regional and international cooperation mechanisms including the BRICS, and further lift bilateral ties to a new high.

‘Going Green’ Helps us to Prepare for Future Shocks