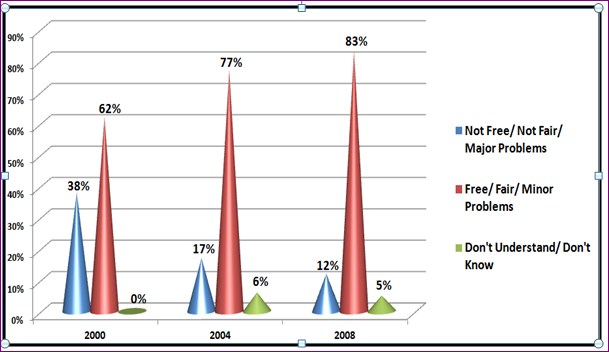 In our critique of the Dr. Bawumia Power Point report of 18 August, 2015, that claimed that Ghana’s electoral register is “bloated”, we proved that Bawumia’s case had more gas than evidence. To the point, the methods Dr. Bawumia employed to present his case and conclusions were either flawed, incomplete, or self-serving. (See and read our report dated 6 September, 2015, at www.GhanaHero.com/Visions).

Of late, we’ve seen and read reports about some individuals and a group that appear to have bought Dr. Bawumia’s “bloated and gasified case” hook, line, and sinker. At least, that is what we know by their communications and activities with the press and police authorities.

There is the group that calls itself “Let My Vote Count Alliance (LMVCA)”. As far as we know, this group did not exist before Dr. Bawumia’s report although the electoral register has existed at least since the 2012 election. Notwithstanding the record, the one agenda of this group is a “New Electoral Register”. To the extent Dr. Bawumia did not prove his case, the LMVCA group is engaged in projection of a one-way, partisan response to whatever issues exist with the Ghana electoral register (and the electoral system in general).

The fact is, in every country, in every election, votes can count in more ways than one. So, it is not clear to many people if purchasing a new electoral register at a cost the NPP has not bothered to project, is preferable to curing current deficiencies in the Ghana electoral system some of which are acutely related to the wart-infested Rawlings Constitution(s) that the NPP itself neglected to help Ghana repair during their 8 years at the helm of Ghana.

Then there are former Presidents John Kufour and Jerry “Accountability” Rawlings!

While we do not know whose concept of “power” Mr. Kuffuor was referencing, we know that the lawyer in Mr. Kuffour knows perfectly well that analogous to “power” is the concept of “authority”. And with “authority” comes “mandate.” To the point, the Electoral Commission has “authority” to perform, and a “mandate” to achieve certain objectives for Ghana, independently.

But the Supreme Court, as the lawyer knows, is the last resort to legitimate power, and thus “power unto itself”.

We believe that idea is not lost on the Electoral Commissioner of Ghana, Ms. Charlotte Osei.

She is, after all, also a lawyer!

With respect to Mr. Jerry “Accountability” Rawlings, former coup plotter who is actually now one among a shrinking few with an “indemnity-power-clause” behind his back, his “Dr. Afari-Djan conditional statements are striking in more ways than one. He is seeking to have it both ways, which proposition seem to be lost to even some of Ghana’s best reporters and journalists.

For instance, contrary to what Mr. Cameron Duodu and others will have is know, Mr. Rawlings did not surely say that Ghana should go purchase a new Voters Register just about 13 months before a major election. According to reports, Mr. Rawlings said, “…Everything possible must be done to ensure a very credible electoral process…The only way we can really contain and prevent things from getting out of hand is to ensure that the electoral process and that register are as credible as possible…”

So, with an extraordinary threat-laden counsel to the Electoral Commissioner, Mr. Duodu missed the boat on that one, big time, the other day when he sent a message to EC Commissioner:

“…There is just one thing I want to tell her about her dogged resistance to the idea of compiling a new electoral register, as demanded by the ppposition NPP and several organisations. And that is this: Madam, if you see J A Kufuor (ex-President) and J J Rawlings (ex-President) saying the same thing, you’d better listen and listen well.”

Well, if we read well, Mr. Rawlings and Mr. Kuffour are NOT “saying the same thing”.

In sum, it is clear that many opinionated observers and writers are simply dismissing the Electoral Commission as not worthy of consideration for their professionalism and dedication to the mandate that their mission requires they achieve in independence, in Ghana-centered fashion, for Ghana. Clearly, if only for “independence” sake, the EC cannot simply jump when “… demanded by the ppposition NPP and several organisations”, when there are more than 26 million people, and potentially fewer than 50% care for that NPP agenda, or are card toting members of the “several organizations”.

Here are some data for the belt – fat and skinny, however you like it!

Since 1999, Ghana has held six multi-party elections (1992, 1996, 2000, 2004, 2008, 2012). All of those elections were witnessed by local and international observers, and Ghana’s political parties. After each election, practically all the observer groups issue reports about events observed and recommendations for future action in other to ensure that the next election(s) will be better managed, more transparent, and less acrimonious.

In addition to those local and international observers directly observing election activities, live, so to speak, other entities provide reports of scientific surveys on politics and attitudes and perceptions of citizens to the electoral system and the larger political, socio-economic context, among other important subjects.
One entity that has actually taken a look at citizens’ perceptions of elections and governance after elections is AfroBarometer.

In a report published in 2009, AfroBarometer presented information on Ghana about citizen perceptions of the fairness (or lack of fairness), of the three previous elections (i.e. 2000, 2004, and 2008).

From this review, research now available shows increasing perception by Ghanaians that elections are “free and fair”. That is generally information available from reports issued by election observers, both within and outside, Ghana. This includes observers from the United Kingdom where several NPP officials travelled recently for what, we do not know!

We believe that this is an important point for those “demanding” a new “Electoral Register”. They must digest that sufficiently.

In the main, having failed to prove that the electoral roll is “bloated”, some member of the NPP are attempting to run roughshod over the Electoral Commissioner. As any administrative professional worth their name and title knows, it takes six months (or more) for a new employees to fully integrate into an organization before they can productively contribute to the mission of any organization, no matter their qualifications.

Everyone agrees that there are issues with the Electoral Register. The election observer reports have documented those. Those are the items the EC ought to be addressing by cross-checking and adjudicating them against the updates from the stakeholder joint meetings and other independent reviews by Commission.

Surely, the NPP is not the stakeholder, however they may want to twist it, and us!

2. AfroBarometer. Popular Attitudes toward Democracy in Ghana: A Summary of Afrobarometer Indicators, 1999-2008 6 May 2009
http://afrobarometer.org/sites/default/files/publications/Summary%20of%20results/gha_r4_di.pdf.

3. Cameron Duodu. Why Are Public Officials So Stiff-Necked In Ghana? Ghanaweb, 17 October 2015, http://www.ghanaweb.com/GhanaHomePage/features/Why-Are-Public-Officials-So-Stiff-Necked-In-Ghana-388284.