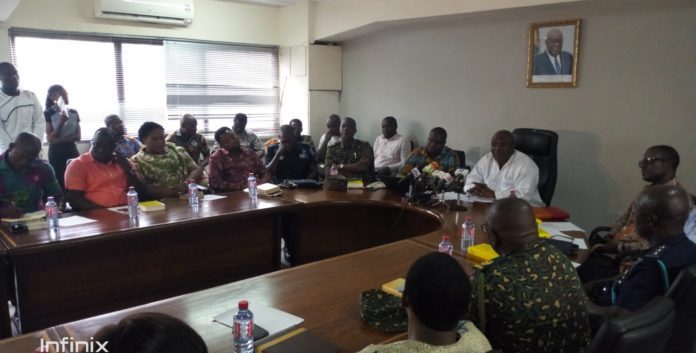 Deputy Minister of Trade and Industry, Carlos Ahenkorah, who doubles as MP for Team West has inaugurated two separate Committees to help curb the spat of foreign retail trade and pirated textile prints on the Ghanaian market.

The committee on foreign retail trade were made up of 21 members drawn from various security agencies, the Customs Division of the Ghana Revenue Authority (GRA), Ghana Police Service, Ghana Immigration Service, Ghana Union Traders Association (GUTA), and other government agencies to ensure that, foreigners comply with rules governing trading in the country.

According to the Deputy Minister, “The Ministry of Trade and Industry has notices with great concerns foreigners engaged in retail trade contrary to section 27 (1a) of the GIPC Act 865, 2013.”

In the wake of this, the Ministry saw the need to create the committee and charge them with the mandate to apply article 27 of the Ghana International Trade Commission (GITC) bill to actually regulate peoples existence on the trade platform as to whether they conform to whatever the rules of engagement states.

He noted that, the Act stated clearly in article 27 (1) that, ‘a person who is not a citizen or an enterprise which is not wholly owned by citizen shall not invest or participate in (a) The sale of goods or provision of services in a market, petty trading or hawking or selling of goods in a stall at any place.’

Speaking at the inaugural event at the Ministry in Accra, he implored the Committee to sensitise the public on the effects of foreigners engagement in retail trade and regularly engage executives of Foreign Trading Association, and he also reminded the committee that, them have no prosecutorial powers therefore, they should not harass or prosecute them but ensure they comply with the laws for peaceful coexistence.

Chairman of the committee, Mr. Julius Kofi Gbogla, Assistance Commissioner of Ghana Immigration Service, Customs Division, on behalf of the committee thanked government for entrusting in them with such a great responsibilities.

He however assured that, the team were very committed to abide by the terms of assignment rested on its shoulders.

Relatively, a 12 member vetting committee on pirated textile prints, made up of affable people drawn from various agencies including the Ghana Standards Authority, was set up to sit on hearings of people whose textiles or materials will be seized by the task force whose mandate is to go round and check if the textiles being sold on the markets are pirated or not, and as well to ascertain the real ownership of the goods in question.

The chairman of the committee, Mr. Kwasi Owusu Boadu, from the Ghana Standards Authority and his team were charged to collaborate with the taskforce to check that, all importers seek approval prior to importation and enforce the guidelines on importation of textiles into the country.

Members of the Vetting committee were also charged to keep minutes of all committee meetings which outline the issues discussed and include a clear record of any decision or recommendations made.