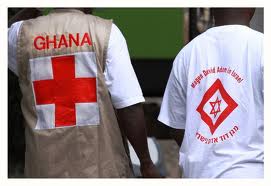 The beneficiary Districts include; Bongo, Binduri, Kassena-Nankana Municipal, Nabdam, Pusiga and Talensi Districts.
The equipment, including:22 mobile phones for riders, training of both riders and midwives valued about .

Gh₵1,000,000, was funded by the Swiss Red Cross (SRC) to support activities of the SRC-supported Maternal, Newborn and Child Health (MNHC) project in the six Districts.

At a ceremony to present the equipment, Mr Thomas Okollah, the SRC Country Coordinator said since 2014, his outfit supported the MNHC project implemented by the GRCS in the Upper East Region.

“It came to light during the initial stage of the project implementation that the pregnant women and newborns who needed acute health services were challenged by the inability to easily access health facilities due to lack of reliable means of transport.

Mr Okollah said with the successful performance of the pilot project and increased request by the GHS at the District level, and Mothers’ Club members in the communities, additional 10 tricycles were procured in 2017 and donated to 10 Community-Based Health Planning and Services (CHPS) compounds to support referral of expectant mothers and children in four Districts.

Mr Kwame Gyimah-Akwafo, the President of GRCS said the MNCH project would complement government’s efforts at reducing maternal and child health mortality in the country, as it worked with 80 clubs and communities in the beneficiary Districts.

He said even though the MNCH project procured 10 tricycle ambulances in 2017 for the Binduri, Bongo, Nabdam Districts and Kassena-Nankana Municipal, they were not enough to solve the transportation challenges, hence the need for the add up.

Dr Winfred Ofosu, the Upper East Regional Director of the GHS who received the items, said tricycle ambulances had over the years played a critical role in community emergency transport, especially transportation of pregnant women, new born babies and patients with emergency health conditions in communities and lower level facilities in the Region.

He said the advent of motorcycle ambulances had reduced delays patients in communities hitherto faced with emergency health conditions across communities in the Region, “As a result of this, we have seen a lot of lives been saved. Through this ceremony, the number of tricycle ambulances in the Upper East Region will increase.”

Dr Ofosu said the gesture would complement the National Ambulance Service in the beneficiary Districts and explained that the haemocue machines were used to test the haemoglobin levels of patients.

He noted that many lower level facilities such as health centres and the Community-Based Health Planning and Services (CHPS) compounds lacked laboratories and could not perform basic laboratory investigations to diagnose anaemia or low level of haemoglobin.

He said women with anaemia had higher risk of death during childbirth as little blood lost could worsen the health state, and blooding in pregnancy remained a major cause of maternal mortality in the Region.

Dr Ofosu thanked the Swiss and Ghana Red Cross Societies for the gesture and gave the assurance that the equipment would be used to achieve their intended purposes in the beneficiary Districts.