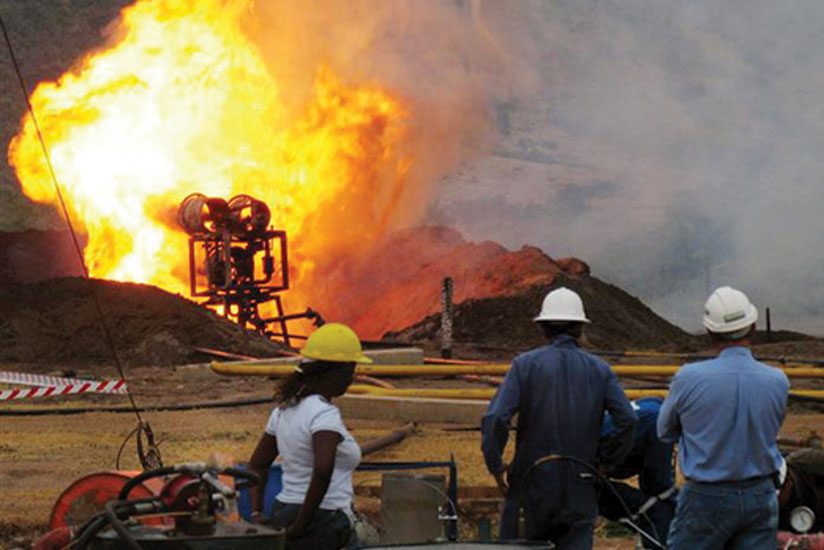 By: Adnan A. Mohammed

According to energy expert?s analysis of the ENI/Sankofa gas deal signed between ENI, VITOL and GNPC, the fiscal benefits of the entire project based on the working interests of the parties gives ENI Ghana and Vitol Ghana (Contractors) 56% of total cash flows and profits of US$7billion, equivalent to the cost of the project. Dr. Mohammed Amin Adams, Executive Director of African Center for Energy Policy explained that, based on after tax working interest, the contractor group will be entitled to US$14.3 billion (56%) of total cash flow over the project life whilst the state is entitled to US$11.1 billion (44%).

?The state take is lower than what pertains to previous contracts. Given that the project is a US$7 billion project, the contractors will be making profit of US$7billion. This makes the project a profitable one at an oil price of US$90 per barrel and gas price of US$9.8 per mmBtu.? Dr. Amin had noted.

Further analysis of the terms and conditions of the Agreements and Term Sheets by ACEP showed that, the deal is fraught with badly negotiated terms, and at most serving the interest of the Contractors rather than Ghana?s. The findings from the analyses show that the government offered over-generous terms to the Contractors just to satisfy Ghana?s thirst for gas supplies. In trying to satisfy the country?s demand for gas, the incentives provided to the Contractors exceeded what pertains in international transactions of similar nature.

It could be recalled that, President John Dramani Mahama recently witnessed the signing of Agreements between GNPC and the Offshore Cape Three Point (OCTP) Partners; ENI Ghana and Vitol Ghana over a US$7 billion integrated oil and gas development in the Sankofa-Gye-Nyame Fields.

The Agreement covers terms and conditions for the financing of the project by the Contractors and for the sale of the Contractors? share of gas produced to GNPC.

Again, the analysis of the deal revealed that, the Government?s fiscal support package, which included an exempt debt-to-equity ratio of 2:1 at 7% interest on the commercial loans of the Contractors, would lead to significant revenue losses to the state over the project life of 20 years, since interest expenses are tax deductible. According to the agreement, the state must guarantee that at any time, the free fiscal support to the Contractors remain US$125 million to make the initial gas price of $9.8 per mmBtu.

This could run into several millions of dollars when gas prices fall. In the event that the contractors source the loans from their affiliates, the gains to the Contractors could increase at Ghana?s expense.

The dangerous part of the term and condition of the contract is that, the Government is required under the Security Package and Fiscal Support Agreement to issue five (5) different Sovereign Guarantees estimated at about US$1.5 billion in addition to World Bank and IDA guarantees. This situation over-exposes the state to too many risks and demonstrates the lack of investor confidence in the Ghanaian Government.

Dr. Amin noted that, GNPC is required to make an upfront payment in cash to the Contractors or allow the Contractors to over-lift GNPC?s share of oil at the beginning of production of oil, for the purpose of making Gas price of US$9.8 per mmBtu viable. However, although the amount is expected to be recovered at the end of production, the recovery amount does not attract interest charges. This is not consistent with sound financial management.

The Government is required to allocate the maximum 55% Net Carried and Participating Interest to GNPC beyond the 15 year period for the capitalization of GNPC as provided in the Petroleum Revenue Management Act 2011 (Act 815) or PRMA. This violates Section 7.3 of the PRMA and will therefore amount to an illegality.

Further analysis of the terms and conditions of the Agreements and Term Sheets by ACEP showed that, the deal is fraught with badly negotiated terms, and at most serving the interest of the Contractors rather than Ghana?s. The findings from the analyses show that the government offered over-generous terms to the Contractors just to satisfy Ghana?s thirst for gas supplies. In trying to satisfy the country?s demand for gas, the incentives provided to the Contractors exceeded what pertains in international transactions of similar nature.

The Sankofa-Gye-Nyame Fields is estimated to hold petroleum reserves of 131 million barrels of crude oil and 1.15 trillion cubic feet of natural gas. The project is in two phases ? Phase 1 (Oil) and Phase 2 (Gas). First oil is expected on stream in March 2017 whilst first gas is expected in February 2018.

Critically reviewing the contract reveals that, sharing of petroleum in monetary terms based on the fiscal regime in the OCTP Petroleum Agreement. The fiscal terms include royalty of 7.5% for oil since the water depth is in excess of 400 mters; gas royalty of 5%, corporate tax of 35%. GNPC has a carried interest of 15%; and additional paid interest of 5%. The working interest of the partners therefore amount to ENI Ghana (44%), Vitol Ghana (35%) and GNPC (20%).

In spite of these gains the company is likely to make from the deal, the Government has further over-exposed the country to too many risks due the decision to buy all the gas produced by the contractor. The exposure takes the form of guarantees and security to keep gas price at $9.8 per mmBtu and to support the Gas Sales Agreement. This is where the real challenge is. The over-generous concessions the Government and GNPC are providing to the Contractors are examined here.

The Government and GNPC have offered through the Supplementary Agreement to make the initial gas price of $9.8/mmBtu viable by providing a fiscal package to the tune of $250 million. A total of $125 million will be provided by GNPC upfront, whilst the remaining fiscal concessions amounting to another $125 million to be provided by Government will ran over the project life.

Per the deal, GNPC has two options for executing its upfront payments to the Contractors: Cash contribution of the total amount of $125 million, or the Contractor over-lift of oil due GNPC to the tune of $105 million plus GNPC cash purchase of remaining oil barrels in stock to the tune of $20 million at the beginning of production.

The implication of this is that, there is no room for the contractors to make a loss at any time or for their profit levels to decrease; and the state is obliged to assume the full risk of a loss occurring to the contractors through GNPC paying cash to offset any decrease in the contractors? profitability. In addition, the Government must issue a Sovereign Guarantee of $125 million to pay for the shortfall in case GNPC defaults. The assumption of these risks by the state alone is too high in an industry that is very volatile. Since, the Contractors already make substantial profits from the oil project, the risk of a loss to the contractors must be shared with the state rather than the state entirely assuming the risks.

Although, the guarantees in the deal are required to make a Gas Sales Agreement effective; whilst guarantees are normal with international transactions such as this, some of the guarantees provided in the term sheet for the security package are disturbing. At most, they undermine Ghana?s sovereignty by tying down the hand of the Minister of Finance, GNPC and violating sections of the Petroleum Revenue Management Act 2011 (Act 815). Further, GNPC shall not sell gas in any currency apart from US Dollars conflicting with the domestic currency regulations.

According to the term sheet, GNPC is required to open a US Dollar main Escrow Disbursement Account, which shall receive revenues from the following sources: Domestic gas sales revenue including GNPC’s net carried and participating interest from Sankofa-Gye Nyame, Jubilee and TEN gas revenues.

In addition, all funds representing GNPC’s share from the Petroleum Holding Fund (excluding GNPCs cash calls and financing costs associated with petroleum agreements which are included in equity financing costs under section 7.2a of PRMA) and all revenues arising under gas sales agreements including on-sale gas by GNPC from existing and new developments from or across OCTP, Jubilee and TEN.

At this juncture, it is not clear why gas sales revenues from Jubilee and TEN projects must be transferred to the Escrow Account provided for in the Security Term Sheet for the OCTP Block; and managed by GNPC and the OCTP partners. That is, the OCTP Contractors are invariably dictating the conditions under which Jubilee and TEN gas purchases will be paid for by GNPC. In the event that the Jubilee and TEN operators have different terms covering payment for their gas sales, the OCTP Gas Sales Agreement will be adversely affected. This also means that the Security package must not exclude Jubilee and TEN partners from the negotiations.

Also, the payment for gas sales from the Escrow Disbursement Account will be further backstopped by a World Bank Partial Risk Guarantee equivalent to $600 million and GNPC?s risk of default payment cover of $150 million by the International Development Authority (IDA). Notwithstanding these guarantees, the Government must issue a Sovereign Guarantee to cover any payment shortfalls after the Partial Risk Guarantee provided by the World Bank is exhausted.

Apart from the guarantees provided by the World Bank and IDA; and the Sovereign Guarantees provided by the Government for any shortfalls in payment for gas by GNPC, the corporation is further required to open a US Dollar Escrow Reserve Holding Account for the exclusive benefit of ENI Ghana and Vitol Ghana. The Reserve Account shall be funded by GNPC before first gas with an amount equivalent to 4.5 months of the Contractors share of Annual Contract quantity. This requirement is more stringent given that Jubilee and TEN Gas sales payments Escrows require an amount equivalent to 3 months of annual contract quantity.