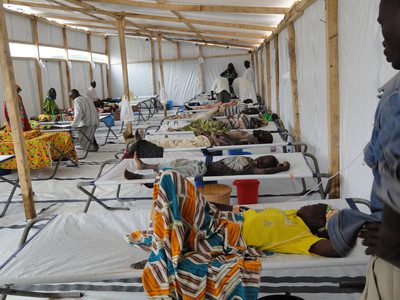 Since Friday, field workers comprising graduates from Schools of Environmental Hygiene and officials of the Environmental Hygiene Department of local government authorities have reached out to communities and public places in the capital to educate people on how to avoid catching the deadly diarrheal disease.

In 2014, a cholera outbreak that started in June got protracted and spilled over to 2015, with a total of 28,975 cases recorded at the end of the year (52 weeks) while 243 deaths occurred with a case fatality ratio (CFR) of 0.8 percent.
The outbreak was reported from 130 out of 216 districts in all the 10 regions of the country.

?The Local Government Service is collaborating with the Ghana Environmental Health Officers Association (GEHOA) and sponsored by Global Communities, a local Non-Governmental Organization (NGO), to sensitize communities in eight sub-metropolitan areas in the capital,? Leticia Antwi, Sub-Metro Director for Osu Klottey Sub-Metro in the capital, has told Xinhua.

The teams, which will work in suburbs critically susceptible to cholera outbreaks in the capital, will also distribute Aquatab water purification tablets to residents.

These measures, according to Antwi, had become very critical, especially after the June 3 flood and gas station inferno that claimed close to 170 lives in the capital.

?We want to ensure that the cholera outbreak we experienced last year is not repeated this year,? the Sub-Metro Director stressed.

Ghana has only been able to achieve 13 percent sanitation coverage against a Millennium Development Goals (MDGs) target of 54 percent, with the MDGs coming to an end this year.

It added however that the cases were on the decline but urged that measures be taken to prevent further outbreaks during the rains.

The campaign is also scheduled to touch more municipal areas close to the capital, William Freeman Goku, General Secretary of GEHOA, said in a speech.

According to him, the campaign is a call on the Environmental Health Professionals and their local unions to take action to contribute towards the ongoing National Sanitation Day Campaign embarked upon by the government. Enditem