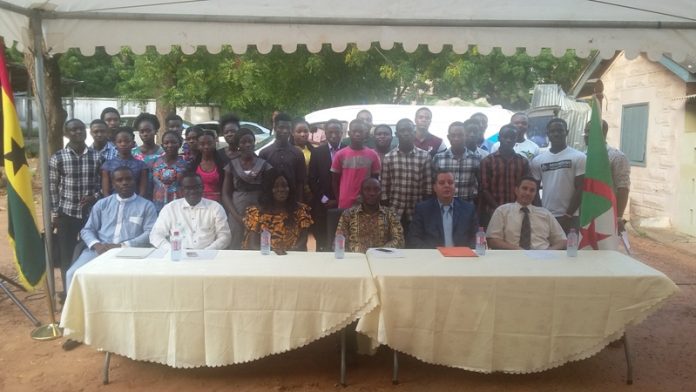 The Algerian Government has awarded a quota of 40 undergraduate scholarships in various disciplines to Ghanaian students to study in selected Algerian Universities for the 2017/2018 Academic year.

As part of the scholarship programme, the awardees would undertake a one-year French language course prior to the commencement of their programmes of study. This has the objective to immerse students in the culture of Algeria especially their way of life, pronunciations and the actual meaning of words in French.

Mr Farouk Boumaza, the Deputy Head of Mission of the Embassy of the People’s Democratic Republic of Algeria briefing the students at a pre-departure session at the Scholarship Secretariat in Accra, said Algeria and Ghana had a good and long-standing cooperation in the area of education.

He said the Algerian government had adopted the Universal Higher Education System which was the License-Master-Doctorate (LMD), since the academic year 2004-2005, except for medical science, and it had been generalised during the academic year 2011/2012, adding that License is three years, Master two years and doctorate degree three years.

He added that the LMD system was characterised by the external recognition and gave more possibility for jobs later.

Mr Buomaza urged the students to study hard during their stay and come out successfully and become proud ambassadors of Ghana and Algeria.

Mr Kingsley Agyemang, the Registrar of Scholarships Secretariat lauded the Algerian government for its continuous development assistance through the award scholarships to deserving Ghanaians every year at the tertiary level of education.

He said President Nana Addo Dankwa Akufo-Addo was committing more resources to education than any other Head of State in the current political dispensation as evidenced by the introduction of the Free SHS Policy, restoration of Teacher and Nurses Trainee allowances.

Mr Agyemang said government was committed to play its role in paying supplementary allowances and other entitlements due the students during their stay and duration of studies in Algeria.

“The Secretariat under a new management has strengthened its monitoring mechanisms and is desirous of establishing regular contacts with students including monitoring visits towards the stated objective.

“Let me take this opportunity to thank the Ministry of Education, the GETFund Administrator and GETFund Board for not continuing to perpetuate the illegality as demonstrated by the previous administration with the opulent defiance of section 2(2)(b) of the Ghana Education Trust Fund (Establishment) Act, 2000 Act 581.

“This gesture would mean that, in 2018, more students in the second cycle and local tertiary would be assisted.’’, he said.

Mr Agyemang therefore urged the students to eschew indiscipline and all forms of vices that would disrupt their studies, inhibit progress and bring the international image of Ghana into disrepute.

Mr David Adu Tease, an Alumnus of the Scholarship, advised the students to learn the diverse cultural dynamics of the different people they would encounter and merge the cultures to enable them to co-exist peacefully.

Master Silas Angimah Angate, a beneficiary of the scholarship in an interview with the Ghana News Agency (GNA), expressed much appreciation to the Algerian Government and the Government of Ghana.