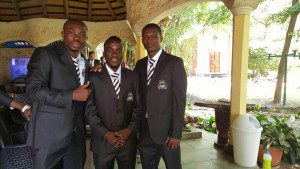 Influential winger Solomon Asante has recovered from the thigh injury he picked up while playing for Ghana in the game against Comoros last month.

Gladson Awako who picked up an injury during the CAF Champions league campaign has also recovered in time for the championship.

All five Ghanaian will be heavily involved in the tournament which will staged between 10th and 20th of this month in the Nagai Stadium in Osaka and the International Stadium of Yokohama.