Miss Mantey-Amoo, better known as Akweley, came to the limelight following a remarkable display of rich knowledge in Ghanaian culture and traditional matters.

Mr John Ashong-Mettle, the Public Relations Officer of Goldstar Airlines, told the Ghana News Agency that the choice of the former beauty queen is in line with the company’s policy to indigenize its operations and give pride of place to Ghanaians.

“Akweley, who represented the Greater Accra region, during the Ghana’s Most Beautiful Pageant Show, exemplified excellence and kept spellbound television viewers during that season and so her choice is apposite, which is pertinent to the growth of the airline” Mr Ashong-Mettle said.

According to the Goldstar PRO, as lead representative of the airline, her role will be, to have an oversight over the Ghanaian cabin crew and also market the country to the array of passengers in terms of bringing to light the rich cultural heritage of mother Ghana when the aircraft is in flight.

Miss Mantey-Amoo was engaged by the Accra Metropolitan Assembly and Waste Management Company, Zoom Lion as their brand ambassador in 2012 and United Nations Millennium Development Goal Ambassador, to facilitate a sanitation project.

She was contracted to be the ambassador for Ghana Textiles Print in 2012.
In 2014, Akweley was engaged by Phylfry Cooking Oil as their ambassador and she is bringing her rich hospitality management skills to the airline industry

The other ambassadors who will be working in tandem with the lead ambassador will above all interface with passengers, both Ghanaians and expatriates in flight.

“I need to emphasize that the lingua franca will feature some of our Ghanaian dialects and other international languages as the medium of interaction” Mr Ashong-Mettle said.

Mr Ashong-Mettle said the company has started accepting applications for the position of cabin crew from Ghanaians and gave an assurance that the company is committed to ensure that the interests of Ghanaians are promoted and protected.

“Goldstar Airlines will receive into its fold with open arms, performers, players and stakeholders in the tourism and aviation industries.

He added that Goldstar Air is working with some stakeholders and players in the music and movies industries which will constitute seventy percent (70 per cent) of our in-flight entertainment, which will create economic gains to the industries.

Towards this end, Goldstar Air welcomes other stakeholders in the music and movies industries to work in a collaborative effort to promote local content on all our aircrafts. 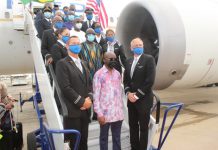