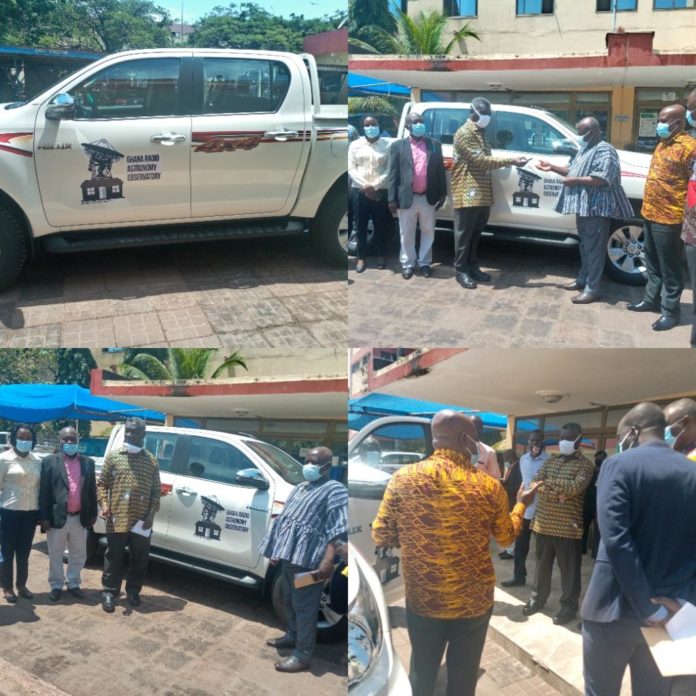 The Ministry of Environment, Science, Technology and Innovation (MESTI), on Thursday, presented a brand new Toyota Hilux Pickup vehicle to the Ghana Radio Astronomy Observatory, to aid in the execution of its mandate.

The vehicle with the registration number, “GN-7129- 20”, was to eliminate the obstacle the Observatory faced with regard to movement in the quest to executing its mandate efficiently.

The Observatory, a unit of the Ghana Space Science and Technology Institute (GSSTI) of the Ghana Atomic Energy Commission (GAEC), was developed in Kuntunse by government with support from Vodafone Ghana in collaboration with the Republic of South Africa.

It was a parallel initiative to the multi-billion international Square Kilometre Array (SKA) project, set up by converting the redundant 32-kilometre communication satellite dish of the nation into a radio astronomy telescope.

Professor Kwabena Frimpong-Boateng, the Minister, MESTI, who presented the vehicle, explained that the telescope, which is part of a network of telescopes in nine partner countries in Africa, called “A Very Long Baseline Interferometry Network” Project, was used to carry out astronomy research in the country and train astronomers in the various Universities nationwide.

He said Ghana was one of the nine partner countries in Africa led by South Africa that won the SKA Project with the others being Botswana, Zambia, Namibia, Mozambique, Kenya, Madagascar and Mauritius.

The GSSTI, he said, was in the process of introducing the African Colocation Programme that involved establishing satellite ground stations, scientific instrumentation and data infrastructure at Kuntunse.

Professor Benjamin J. B. Nyarko, the Director-General of GAEC, who received the vehicle, said the last time the Institute received a vehicle from government was in 2008, and that created a hindrance in the successful implementation of their programmes.

He expressed gratitude to the Minister and the President for believing in Science and the need to promote it to enhance socio-economic development.

“I assure you that the vehicle will be used for the intended purpose. We won’t disappoint you,” he added.
Professor Dickson Adomako, the Director of GSSTI, explaining the core functions of the Institute, said it used space-related technology to promote national growth.

He said such technology was used by all sectors including; the health, where ‘unmanned aerial vehicle’ (UAV), also termed as ‘drone’ was used to transport drugs and other medical supplies to patients and telemedicine, to enable medical consultants to administer care and advice to patients at different settings.

Others were machines that could take pictures while spraying to identify defects in the agriculture sector.