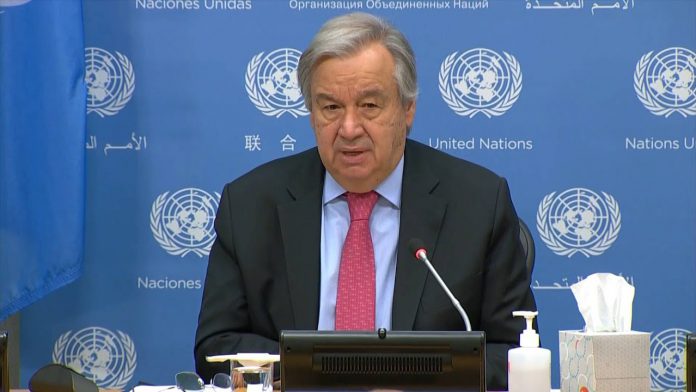 UN Secretary-General Antonio Guterres on Friday was appointed for a second term at the helm of the organization, UN General Assembly President Volkan Bozkir said.

“The General Assembly has just appointed you Secretary-General of the United Nations for the term of office beginning January 1, 2022, and ending on December 31, 2026,” Bozkir told Guterres after a swearing-in ceremony.

Earlier in June, the UN Security Council recommended Guterres for the Secretray-General’s position. Based on the recommendation, the UN General Assembly appointed Guterres for the second term in office in a special session on Friday. Guterres was the only candidate running for the position, after his home country, Portugal, officially endorsed him to pursue a second term.

In his oath of office, Guterres said throughout the second term he will do everything to ensure an optimistic scenario for the world undergoing important changes set to replace old ways of thinking.

“We are truly at a crossroads, with consequential choices before us. Paradigms are shifting. Old orthodoxies are being flipped,” Guterres pointed out.

Under such circumstances, the United Nations itself has to accelerate the transformation to achieve better communications, digital change, more robust performance, bureaucracy reduction and strengthened cooperation, Guterres said.

He also said during the second term, the organization will need to do utmost to overcome the current geostrategic divides and “dysfunctional” power relations among nations.

“I will give it my all to ensure the blossoming of trust between and among nations, large and small, to build bridges and to engage relentlessly in confidence building,” Guterres added.

Guterres was first appointed UN Secretary-General in 2017. Before the current role, Guterres served as UN High Commissioner for Refugees in 2005-2015 and Prime Minister of Portugal from 1995 to 2002.