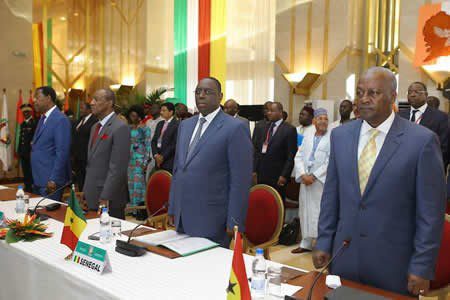 The ECOWAS Assembly of Ministers of Health has issued a seven-point communiqu? developed by the co-ordinating ministerial group for the implementation of the operational plan on the Ebola virus disease. It called for organsiation of mulit-sectatoral missions to Cote d?Ivoire and Senegal to discuss immediate implementation of humanitarian, economic and health corridors in accordance with rules adopted by the Technical Monitoring and Surveillance Group.

It called for preparation and dissemination of harmonised sensitisation and information messages targeting pollutions in an effort to stop the spread of the epidemic.

The communiqu? also requested the ECOWAS Commission for the mobilisation of the armed and security forces to strengthen regional response against the Ebola virus epidemic and provide, among other things, medical personnel and logistics as well as mobilise the support of the military engineers? regiments in setting up treatment centres.

It called for the provision of adequate financial incentives for national health personnel already on the ground and finalisation of the Ebola Regional Operation Plan and its submission to the President of the ECOWAS Commission.

Ghana’s Minister of Health, Dr Kwaku Agyemang-Mensah, called for harmonisation of individual country’s efforts to avoid panicking which could thwart the community’s efforts at dealing with the canker which had claimed more than 2000 lives in the region.