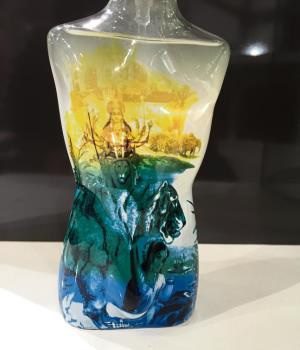 Distinguished Hindu statesman Rajan Zed, in a statement in Nevada (USA) today, said that Hindu deities shown on the bottles?Krishna, Lakshmi, Muruga, Radha?were highly revered in Hinduism and were meant to be worshipped in temples or home shrines and not to be thrown around inappropriately for mercantile greed. Inappropriate usage of Hindu deities or concepts for commercial or other agenda was not okay as it hurt the devotees.

Zed, who is President of Universal Society of Hinduism, urged Chairman Marc Puig Guasch of Barcelona-Paris-New York based PUIG to tender an official apology and immediately recall the objectionable fragrance bottles.

Hinduism was the oldest and third largest religion of the world with about one billion adherents and a rich philosophical thought and it should not be taken frivolously. Symbols of any faith, larger or smaller, should not be mishandled, Rajan Zed indicated. Zed further said that such trivialization of Hindu deities was disturbing to the Hindus world over. Hindus were for free artistic expression and speech as much as anybody else if not more. But faith was something sacred and attempts at trivializing it hurt the followers, Zed added.

PUIG, with 22 subsidiaries, has offices in 23 countries, and its products are distributed in over 140 nations. Its net revenues in 2014 were ?1,508 million and its motto is: Passion, People, Performance. There are ?Jean Paul Gaultier? stores in France, China, United Arab Emirates, Hong Kong, Japan, Russia and Taiwan; besides online presence.

Hindus want Hinduism to be Observed in British Schools