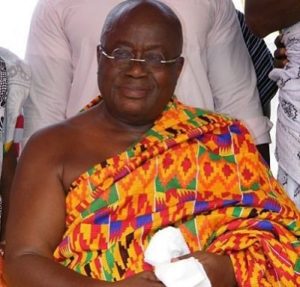 President Nana Addo Dankwa Akufo-Addo has said he would not abandon Christ in all his endeavours as President since it is the power of God that would guide him to accomplish his vision of creating prosperity for all Ghanaians.

He said it was the power of God that propelled him to the presidency and would, therefore, rely on God’s wisdom, understanding and direction to implement pragmatic policies set out by his government to transform the economic fortunes of the country.

“The scriptures say give onto Caesar what is Caesar’s and onto God what is God, but I cannot achieve any meaningful development without God’s intervention and, therefore, I will not abandon Christ as President of Ghana,” he stressed.

President Akufo-Addo made these remarks at the Black Star Square in Accra on Sunday, during the Centenary Celebration of the Christ Apostolic Church International (CACI).

The year-long celebration was held on the theme: “Hundred Years of Impacting the World through Pentecostalism”.

The occasion brought together over 10,000 members of the Church across the world, including India, Italy, Belgium, United Kingdom, USA, South Africa and Nigeria, to acknowledge God’s grace and mercies for sustaining them throughout the turbulent years.

President Akufo-Addo expressed gratitude to all the pastors who encouraged and supported him throughout the campaign period with prayers and asked for their continuous support and prayers in order to accomplish his vision for the nation.

He gave the assurance that his government would root out corruption from the system and implement pragmatic policies that would inure to the benefit of all Ghanaians.

The President noted that Ghana had never been a poor country because it had been endowed with abundant human and natural resources, but it required truthful and God-fearing leaders to utilise them for the wellbeing of the ordinary Ghanaian.

He reiterated his commitment to fulfill his campaign promises to Ghanaians, saying “The promises I made to Ghanaians are not lies but genuine promises and I will make sure they are fulfilled”.

President Akufo-Addo said his government had started implementing some of the promises already including the Free Senior High School and asked the support of all well-meaning Ghanaians to fulfill the rest in the course of his tenure of office.

He said the Church had complemented government’s development efforts over the years and commended the Christ Apostolic Church International for contributing its quota towards socio-economic development of the nation as well as keeping the faith in Christ alive.

Apostle Dr. Stephen Kwame Amoani, the Chairman of the CACI, on behalf of the Church, presented three brand new ambulances to the Ghana Ambulance Service which would be distributed to Sunyani Government Hospital, Komfo Anokye Teaching Hospital in Kumasi and 37 Military Hospital in Accra.

Another ambulance which is yet to arrive in the country would be given to the Tamale Hospital in the Northern Region to enhance health delivery.

President Akufo-Addo joined the leadership of the Church to cut an anniversary cake to climax the centenary celebration.

The President spiced the occasion with his majestic dancing moves to the songs from the Church Choir that erupted the celebration grounds, amidst cheers and camaraderie.

The Christ Apostolic Church was founded by Apostle Peter Newman Anim at Asamankese in the Eastern Region in 1917.

The church currently has over 1.5 million members and 5,087 branches across the world.
GNA/Newsghana.com.gh

37 military Hospital to close down maternity for fumigation