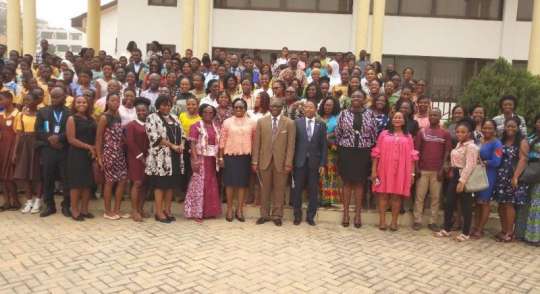 Madam Patricia Appiagyei, the Deputy Minister of Environment, Science, Technology and Innovation, has called for bold, deliberate and ambitious policies for the equal uptake of girls in science education.

She said although most governments had become conscious of the importance of inclusive science education for women and girls, and had improved policies and investments towards addressing the gaps, the impact had been very slow.

Madam Appiagyei said presently, the uptake and performances of females for science courses at both secondary and tertiary levels of education were still very low.

She attributed that to the low levels of interest, lack of gender responsiveness in the teaching and learning of science, lack of female teachers as role models to sustain interest of the girl-child, poor approaches and methodology in teaching, and negative attitudes of some teachers.

Madam Appiagyei made the call in Accra on Wednesday during a programme to commemorate the UN International Day of Women and Girls in Science.

She said the time was apt to intensify advocacy for more investment into Science, Technology, Engineering, and Mathematics (STEM) Education for females.

“Consequently, we need a unified stakeholder voice to push for an affirmative action of a 50:50 male-female ratio in the uptake of students into pure science second cycle educational institutions,” she said.

The theme for the 2020 celebrations: “Investment in Women and Girls in Science for Inclusive Green Growth,” emphasised the need for deliberate support for females to be able to unravel their potentials through knowledge and involvement in the field of science, she said.

She said constituting a National Advisory Council by the Government to provide guidance on STEM Education was a commendable commitment towards improving science education, and urged stakeholders to intensify advocacy for the establishment of pure science-based secondary schools for girls.

That would increase admissions of girls into STEM programmes, close the wide gender gap, and whip up their interests in the sciences from the basic to the university levels and beyond, she said.

“We will also ensure improved teacher education by amending the method of teaching these subject to attract the expected results.”

Professor Daniel Asiedu, the Provost of the College of Basic and Applied Sciences, said strengthening female participation in science could not be done in isolation, but required concerted efforts by all stakeholders in education and industry to work together at achieving it.

He said the University of Ghana had been at the fore front of women empowerment as evidenced in the 2019/2020 admissions, where 9,288 females enrolled compared with 8,924 males, representing a ratio of 51:49.

Also the University had, over the years, instituted several internal reforms to enhance women experiences in teaching and learning.

These include appointment of qualified women to academic and senior administrative positions, strengthening its sexual harassment policy implementation and increasing female participation in STEM and sports by awarding scholarships to deserving students.

Ms Monica Ankrah, the Greater Accra Regional Director, Ghana Education Service, urged stakeholders to intensify efforts to shield the girl-child from being undermined, under estimated, stereotyped, relegated to the kitchen or demotivated to venture into male dominated careers.

“It is our desire as implementers of educational policies to expose our girls to the outside world, especially to the science community to prepare them for the field of work, motivate them to love science and to break the myth surrounding the science subject.”

Mrs Ankrah said science had, over the years, been labelled as a course for brilliant students and for boys, thereby intimidating the vulnerable (girls).

She said some teachers also discouraged girls from offering the course, adding that the conversation around the subject had never been positive to girls who wished to pursue science.

She called for change if Ghana was to compete fairly with countries globally, who had developed their economies through science and technology.

Mr Abdourahamane Diallo, the UNESCO Representative to Ghana, called for concerted efforts in implementing existing strategies for STEM education, saying it was the key for achieving the Sustainable Development Goals and national development.

The Day was observed to create a platform to celebrate the achievements of females in science, encourage mentoring and networking among the young and older female scientists and researcher generations, and share knowledge on the challenges and prospects in the field of STEM.

GES to distribute laptops to teachers