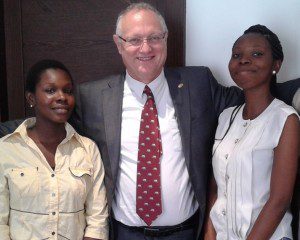 He, therefore, gave the assurance that it would cooperate and partner with any political party, which emerges victorious in the December General Election.

Ambassador Mehl said this at a media interaction with journalists in Takoradi, on Tuesday, as part of his three-day familiarisation visit to the Western Region.

He described Ghana as ‘the lighthouse of West Africa’ and urged the people to believe in themselves and strive to find lasting solutions to their challenges, instead of relying on outsiders for support.

The Ambassador, with his entourage, also paid courtesy calls on the Regional Minister, Mr Paul Evans Aidoo and the Omanhene of Essikadu Traditional Area, Nana Kobina Nketsia V, and participated in an inter-faith church service.

He stated that the mutual trade between Ghana and Israel currently stood at US$40 million dollars and expressed the hope that it would increase to between US$150 million and US$200 million dollars by 2018.

In this regard, he announced that a Ghana-Israel Business Chamber had been established to bolster trade relations between the countries.

The Israeli Prime Minister, Benjamin Netanyahu, he said, decided to renew the diplomatic ties with Ghana and other African countries in order to promote political, economic and security relations for their mutual benefits.

Ambassador Mehl urged Ghanaians to have confidence in themselves because the country had all the potentials of becoming a developed nation.

He observed that half of the land of Israel was a desert and did not have good soil for agricultural activities, but through Science and Technology, they managed to improve the fertility of the soil for agricultural production and it was currently producing vegetables in commercial quantities for export.

“Ten years ago, Israel had a challenge getting water, therefore, we dug one-and-half kilometers deep in search of water and we found an ocean underground with sufficient water that could last us for over 100 years,” he explained.

“If you have the necessity, you will find solution to your problems”.

Earlier, at the Regional Coordinating Council in Sekondi, Mr. Paul Evans Aidoo, the Regional Minister, expressed the readiness of the Regional Administration to collaborate with the Israeli Government to fast-track the development of the Region.

At the residency of the Omanhene of Essikadu, Nana Nketsia said the Region was endowed with many natural resources, which should be harnessed for the benefit of the people.