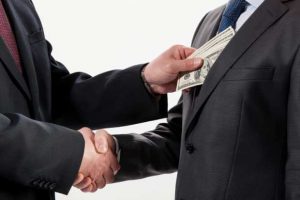 Since the independence of Ghana, corruption has been a serious national issue and continues to be a matter of national importance.

Corruption of public official was one of the major reasons for the numerous coup d’etat the country experienced in the early stages of its formation. The very last coup d’etat in the country spearheaded by Flt. Lt. J.J. Rawlings was basically on the wings of championing anti-corruption, with its motto as “Probity and Accountability”.

Despite the motto of the government which was borne out of this coup d’etat, the administration experienced countless levels of corruption by public officials and many ordinary individuals. Since then, every election in Ghana has been fought on the grounds of corruption and the 2016 one was not an exception. I remember then candidate J.A. Kuffour in the year 2000 campaigning vigorously on his mantra “zero tolerance for corruption”, yet not much was achieved in the fight against corruption for the 8 years of that administration.

Acts such as the Financial Administration Act, the Procurement Act, etc were passed but the strict implementation of provisions of those Acts are yet to be seen. In as similar manner, the immediate past administration which was led by Prof. J.E.A. Mills and subsequently J.D. Mahama campaigned on the increased levels of corruption in the year 2008 and won. Just like the previous experiences, the 8 years of that administration had nothing to write home about in the fight against corruption. As has been the trend, the current NPP government led by N. A. Akufo Addo has used the same ‘political tool’ as a marketing strategy to win the hearts of Ghanaians again.

I believe the reason why these problems continue to be a pain in our neck is that the right approach has not been adopted yet and besides our perception on the issue of corruption is wrong.

The average Ghanaian see corruption as been perpetrated by only politicians. Indeed, such is the notion in Ghana, whenever a mention is made of corruption everyone’s attention turns to the politicians. Though I agree that this notion holds to some extent, I believe the politician is groomed and nurtured in the Ghanaian society that is almost entirely corrupt. We have accepted certain acts of corruption as part our national norms. It will, therefore, be impossible to expect something different from the few politicians while every corner of our country including the church is faced with the same problem. Everyone in the country knows that when you go to almost every organisation in Ghana for a service, you need to ‘dash’ the people otherwise, something which could have been done for you in a day can take more than a month.

My worry on this matter is the fire-fighting approach used by our leaders in tackling the menace. They should see corruption as a national problem and attack it from the ground not only from the top. Before people are elected to positions they would have already been caught in the corruption net due to certain problems in the society which have remained unsolved for a long time. Those are the very problems our leaders should look for and address rather than waiting for the end product of the problem. People don’t become corrupt just by becoming politicians because there are several examples of politicians whose hands are clean. So the problem is not the politician per se but all of us a people.  In my opinion, the means to solving corruption is not only about arresting and prosecuting perpetrators but also about arresting the social hardships which plunge people into it.

Though a lot of people indulge in corrupt practices out of greed. For instance the head of a public institution, who upon the huge salary, free vehicle and fuel, accommodation etc, goes ahead to use the funds of the institution for his or her personal gains. Moreover, a worker who receives decent pay for his or her service but dips his or her hand in the public coffers or extorts money from people is indulging in act of greed.

Notwithstanding the examples above, a lot more others also indulge in it as a means of meeting certain social necessities. I do not mean to justify people’s wrongdoing, but what I believe is this adage in Akan which says, “dua a ebe wo wani no yetu asie na yensensen so”. Thus, it is better to tackle a problem from its root.

If you have a society where governments do not care about where people will lay their heads and leave a lot of people on the street; and young people whose salary cannot even buy their own clothes to struggle to build their own houses as a result of incessant pressure from individual landlords, then you should not be surprised if they begin to find their own way of making life comfortable for themselves.

Transportation system in our country is nowhere near the word good. Going to work every morning is as difficult as getting the work itself. Passengers have been left into the hands of individual transport operators who exploit them for no reason. A journey which one could have spent Ghc1 can be rescheduled involuntarily for them by Trotro drivers to ensure that they pay about four times the normal fare before getting to their destination. People who cannot withstand this, and yet do not have the means to buy their own cars have no option but resort to dubious means (if available to them) to save themselves from this helpless situation. It is true that suffering is not a justification for wrongdoing, but it is also true that the snake bites when it feels pressured.

As I stated earlier, I agree that a lot of these people are motivated by greed, but to some, the pressure outside is beyond what they can contain, hence the need to bite. So the best way to stop the snake from biting is to stop pressuring it. Policies for solving the corruption canker should not be so sophisticated but rather focus mostly on solving the basic social problems of the people such as the provision of affordable housing, reliable health care,  and efficient public transport system in the form of effectively run public Buses and Trains.

I believe that social problems in Ghana which have remained unsolved over the years have provided the breeding ground for the growth of corruption coupled with an inadequate system to detect, arrest and prosecute perpetrators. But to me, even before thinking of how to detect, arrest and prosecute, the attention of leaders should be on how to destroy the breeding grounds to reduce the reported cases and that is to solve the basic social problems.