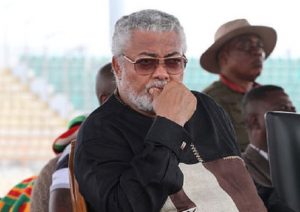 While struggling to parry accusations of aiding Nana Akufo-Addo to unseat President John Mahama and the National Democratic Congress in the 2016 elections, former President Jerry John Rawlings; his wife, Nana Konadu and former Attorney General, Martin A. B. K. Amidu, are busily lacing their boots to take over control of the biggest opposition party.

The NDC founder and his co-schemers, The aL-hAJJ is reliably informed, have fashioned an elaborate strategy to snatch the leadership and control of the party with the aim of blocking former President Mahama from leading the party again.

Sources at the Ridge and Adjiriganor residences of the former military strongman-turned-politician narrated to this paper how Mr Rawlings, his wife and Mr Amidu and other like-minds have been meeting to roll out their plans.

According to a source, the former first president, who is also NDC Founder, and his ilk have firmed up their plots and are only awaiting the Prof Kwesi Botchwey committee to submit its findings and recommendations to the National Executive Committee before they strike.

Top on their agenda, the source revealed, is to launch image smearing campaign and scathing attacks on immediate-past president, Mr John Mahama as soon as the committee submits its report in order to “convince members of the party not give him another opportunity to lead the party.”

“I can tell you that the old man (Mr Rawlings), madam (Mrs Rawlings), Martin and others have been meeting and they have agreed that soon after Kwesi and his people submit their report, old man will start touring the regions to talk to our supporters,” the source who was at one of the meetings told The aL-hAJJ.

It would be recall that former President Rawlings told supporters of the NDC at party’s 2016 campaign launch at Cape Coast in the Central Region that he will come round after the election to share with them (supporters), the ills of the party.

“The task ahead of you won’t be an easy task. I will reserve what I have to say till after the elections when I will come round the country to share with you how I think we could restore the kind of strength that can take us well into the future. There are certain weaknesses that we need to deal with,” Mr Rawlings noted.

Mr Rawlings and his sect, another source noted, “saw the party’s defeat at the polls as golden opportunity to take over control of the NDC. So the first strategy is to plot the defeat of all current executives who are not in their good books and plant their favorites there.”

“When they get their preferred candidates to occupy the leadership positions by which time their assigns would have succeeded in denting the image of Mahama, it would be easy to determine who leads the party into the 2020 elections,” the source added.

The aL-hAJJ is reliably informed that the Rawlingses have penciled three heavyweights of the NDC among which two of them will eventually be selected as preferred flag bearer and running mate ahead of the party’s congress to elect candidate for the 2020 elections.

According to the source, in the event the Ahwoi camp turns down request to team up with the Rawlings camp, the latter will “present Martin Amidu as flag bearer at congress and when he wins, Goosie Tanoh will be nominated as running mate.”

Mr Rawlings and Martin Amidu have been accused by leading members of the NDC of aiding Nana Akufo-Addo and the New Patriotic Party to dethrone President Mahama and the now biggest opposition party, the NDC.

Mrs Rawlings has long distant herself from the NDC, consistently labeling members of the party as filthy corrupt and undeserving of governing the country. This is against backdrop of the fact her daughter, Dr Zanetor Rawlings contested on the ticket of the NDC in the Klottey Korle constituency.

Prior to the election, there were rumors that Mr Rawlings and Mr Amidu were bashing the Mahama government in way to get it out of power to make it easy for them to take over the party.