Mr John Agyekum Kufour is the ex-president of Ghana who has been there and done a lot for his motherland. Without a doubt, he is an intellectual whose pragmatism and concern for his fellow human being made him an ideal person for the high office of President of Ghana. In the quest to serve humanity, rising to the position of Commander –in-Chief of the armed forces simply defines it.
The ‘Gentle Gaint’ as he is popularly referred to, was president of the fourth republic of Ghana from 2001-2009. His unique style of addressing issues concerning Ghana and beyond, won the hearts of people all over the world. Calmness, a trait that comes naturally to him has seen him through his many endeavours in life.
Mr Kufour was born on December 8, 1938 in Kumasi, the central town of Ashanti Region to Nana Kwadwo Agyekum – head of the Oyoko royal family- and Nana Ama Dapaah – a queen mother- . He was the seventh of ten children. He had his Secondary education at Prempeh College in the Ashanti Region. Upon completion, his good grades gained him admission at the Lincoln Inn, England. He was called to join the Bar in 1961 at age 22.
With his passion for politics growing stronger, he entered Oxford University in 1961 and graduated in 1964 with a degree in Politics, Economics and Philosophy. While in Oxford Universtiy, Mr Kufour met and fell in love with Theresa Mensah –who was studying nursing in the same University. The two love birds got married in 1962 and are blessed with five wonderful children. Kufour and his family moved down to Ghana upon a request made by his dear mother in 1965.
He entered the public service in 1967 when he was appointed Chief Legal Officer and Town Clerk of Kumasi till he left in 1969. He was a member of the 1968-69 and the 1979 Constituent Assemblies that drafted the Constitutions of the Second and Third Republics respectively.
He got his first ministerial appointment as deputy foreign minister under the Progress Party government in 1969. From 1969 to December, 1971, he led Ghana’s Delegation to the United Nations General Assembly in New York, the Organization of African Unity (OAU) Ministerial Meetings in Addis Ababa, and the Summit Conference of the Non-Aligned Movement in Lusaka, Zambia. In 1970, he led the Ghanaian Delegation to Moscow in the Former Soviet Union, Prague (Former Czechoslovakia), and Belgrade (Yugoslavia) to discuss Ghana’s indebtedness to these Countries. He was also a member of the Parliamentary Delegation that Visited the United States of America (USA) in 1981 to talk to the International Monetary Fund (IMF) and the World Bank on Ghana’s economic problems.
In 1972 the Progress Party government was overthrown by the military and many officials were thrown into jail, including Kufuor. He was in political detention on two occasions as a result of military coups that overthrew the Second and Third Republics.
After his release he moved to the business world where he became chairman of the board of the Ashanti Brick and Construction Company.
After joining the New Patriotic Party, he ran for flag-bearership position in 1992 but lost to the late Prof. Adu Boahen. He was finally given the nod by delegates of the New Patriotic Party to lead the party in the 1996 elections which he lost to ex-president Rawlings of the NDC.
He was given another chance by his party in 1998 and went on to win the presidential elections in December 2000 and was sworn in as president on January 9 2001. In December 2004, he was re-elected for a second term.
In 2008, Mr Kufuor had the Grand Order of the Star and Eagles of Ghana conferred on him by the Chief Justice, Mrs Justice Georgina Wood.
In June 2011, the World Food Prize Foundation honoured Mr John Agyekum Kufuor and Luiz Inácio Lula da Silva, former president of Brazil, for creating and implementing government policies that alleviated hunger and poverty in their countries. They were commended in remarks by Secretary of State Hillary Rodham Clinton, Secretary of Agriculture Tom Vilsack, and USAID Administrator, Rajiv Shah.
Ghananewslink.com
Disclaimer: News Ghana is not responsible for the reportage or opinions of contributors published on the website. 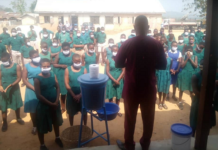 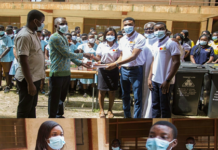