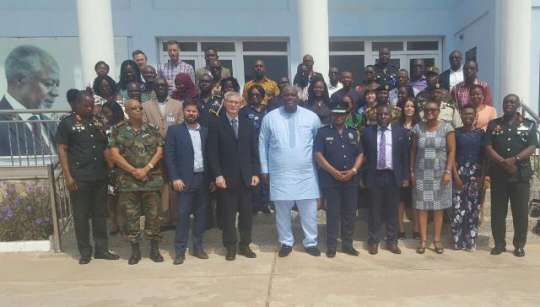 The objective of the five-year project is to understand the linkages between peacekeeping contributions, domestic security provision and drivers of stability in Ghana.

Contributing personnel to United Nations (UN) peacekeeping had been central to Ghana’s foreign policy and essential in shaping the country’s security sector.

However, with the police and military still facing considerable challenges at home, and with the prospect of funding for UN peacekeeping missions being cut, Ghana’s domestic stability might be affected.

Ghana has continuously made contributions to UN peacekeeping since the 1960s; starting just three years after independence in 1957, and maintaining its role in peacekeeping throughout its many unconstitutional changes of government, including military coups. Ghana has served in over sixty missions across the world.

The D-SIP project recommends that peacekeeping experiences should be used more forcefully to create accountability among Ghana’s security forces.

It also recommended that there should be a comprehensive review of Ghana’s approach to international peacekeeping, with a view to understanding and articulating more clearly, the relationship between strategic foreign-policy objectives and the provision of domestic security.

Mr Henry Quartey, Deputy Minister of Interior, who formally launched the project in Accra, said with regards to all peacekeeping missions, Ghanaian Police, Military and Correction officers had been commended for their immense commitment and dedication to duty.

Mr Quartey added that Ghana’s involvement in international security was based, not only on the concern for re-establishing security in the conflict affected country, but also the fact that these conflicts could potentially spill over into Ghana’s territory and affect domestic development and security policies.

Air Vice Marshall (AVM) Griffith S. Evans, Commandant of KAIPTC, said despite changing governments and the state of the domestic economy, Ghana had demonstrated its commitment to contribute to international peacekeeping and continues to play a vital role as a peacekeeping pioneer.

He said Ghana was characterized by rapid economic growth and democratic consolidation; a stable country in an unstable region faced with long-term and emerging security threats, including the effects of refugee flows and insurgent groups.

“It is a hypothesis of the project that Ghana’s sustained contribution to peacekeeping missions and conflict prevention depends on maintaining this status”, he added.

He noted that the $1.67million project therefore, seeks to highlight the operations of peacekeepers outside the country and how they are able to make an impact with their experience, when they return home.

He said the project, which was being funded by the Danish Government runs from August 2018 to July 2013; and involves lots of research activities and fieldworks.