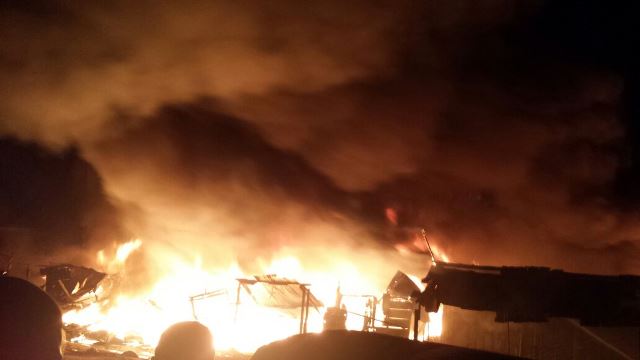 Ravaging fire has swamped a section of the Kokompe market at Darkuman in Accra.

Property worth thousands of Ghana cedis have been destroyed but no casualty has been reported yet. The inferno which started about 9:30pm Saturday, according to residents, flattened several structures, Joy News has gathered.

The market is a major trading area operated mainly by auto mechanics and spare parts dealers.

This comes only a couple of days after the country’s Central Medical Stores was consumed by a fire that took fire personnel about four days to fight.

The state is estimated to have lost over GH?230 million in value for drugs and medical supplies consumed by the fire.

The cause of the blaze at Kokompe is yet to be determined but efforts were being made by both residents and firefighters to bring it under control at the time of filing this report.

It is the second time in a little over three years that the area has been gutted by fire.

Earlier Saturday, fire destroyed a part of the Asokwa Shell filling station in Kumasi in the Ashanti Region. a vehicle was also bunt totally in the inferno