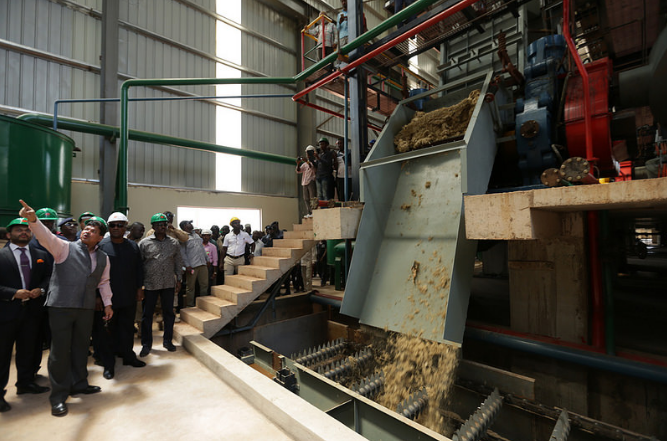 The Komenda Sugar Factory is set to kick off production but requires a minimum working capital of Gh¢6M, the Central Regional Minister, Mr Kwamena Duncan has revealed. He said: “I’m told the machine is able to mill 1,250 metric tons of sugarcane a day which means a huge chunk would have to be secured within the catchment area but no where do they have this to get the machine working”.

Briefing the media on the state of the Region on Monday, the Regional Minister expressed concerned about the unavailability of raw material to feed the factory.

Mr Duncan said except for a nursery of about 25 acres of sugarcane in the backyard of the factory and a yet-to-be-started $24.5M irrigation project for sugar cane plantation, the catchment area did not have the quantity needed for the factory to take off.

“The factory has skeletal staffing situation of about 10 to 15 middle management staff eager and ready to work except that the entire process has not begun and they said if they even have a six million facility as their working capital, they will be able to hit the ground running,” he said.

He noted that by estimation, for a serious production to start at the factory, it would require a year or more because much was needed to be done to get adequate raw materials and this could not be possible in the short term.

The Minister pledged to make strong representation to the Trade and Industry Ministry to see how best the Factory could function effectively to achieve its desired mandate.

Former President John Dramani Mahama inaugurated the Komenda Sugar factory in May last year, with the expectation of providing 7000 direct and indirect jobs to help close the employment gap in the country.

The project also sought to reduce the import bill on sugar and related supplies, as well as add value to raw sugarcane thereby raising the country’s industrial operations.

However, the factory had been closed down as maintenance works were still ongoing.

The Regional Minister also promised to do anything within his power to revamp the Central Regional Development Commission (CEDECOM), the implementing Agency for the development of the Region.

“CEDECOM has the capacity to enable small and medium scale businesses to get along, we have to put it at a position where it would be able to perform its function properly as it should,” he added.

Enumerating how he would deal with the sanitation challenges in the Region, Mr Duncan said he would establish Regional as well as district sanitation committees to monitor and check sanitation issues at those levels.

He said a “name and shame” strategy would be employed for Metropolitan, Municipal and District Chief Executives (MMDCEs) to be held accountable should their assemblies be cited for non-performance on sanitation.

MMDCE’s must participate fully in the PHC exercise – Minister

Minister joins fight against teen pregnancies in the Central Region