Former Ghana Premier League champions Berekum Chelsea, will play host to Kumasi Asante Kotoko at the Berekum Golden City Park, in game, that favours the home side, taking into consideration records of the last match at the same venue. 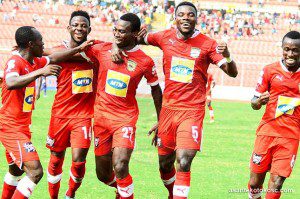 The Blues lost their first league game of the season to returnees, Tema youth whilst Kumasi Asante Kotoko, was victorious against liberty professionals by two, but the 2-0 victory of Chelsea over Kotoko in the last league seem to give them the advantage.

The Blues of Ghana football will be looking to extend their enviable home record against Kotoko on Sunday, following their unbeaten run in their last six meetings.

Kotoko are yet to win a game against Chelsea at Berekum since 2009/10.

Berekum Chelsea will be without their star striker Saddick Adams, whose brace humbled Kumasi Asante Kotoko at the Golden City Park last season but Emmanuel Clottey and Evans Obeng seems to replacements for both.

Meanwhile Kotoko’s new coach Lugarusic, will quest for a winning a streak notwithstanding the absence of key man Obed Owusu and captain Amos Frimpong, who suffered injuries in their last encounter.

Newbies, Abass Mohammed and Baba Mahama hope to make their debut for the porcupines.
GNA/Newsghana.com.gh