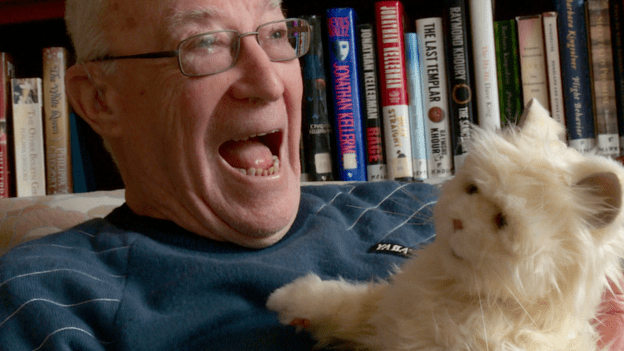 Jim and Alan, having a laugh

“I can feel the movements inside.”

Jim’s a resident at Lake Park, a care home for the elderly in the city of Oakland, California.

And Alan is the name I’ve given to a robotic “companion pet”, developed by toy maker Hasbro, that I’ve been looking after and talking to when no-one’s around, allegedly.

It’s the first product in the Joy For All range, an initiative that Hasbro says is about going beyond play and into areas that combat bigger problems. In this case, it’s loneliness.

The robocat is designed to mimic a real animal. It miaows, semi-convincingly, and it purrs, very convincingly. It’s fluffy and nice to stroke, although the rigidness of Alan’s electronic innards spoils any illusion that he is real.

But even with those flaws, it works. When you switch it on, you instinctively say “hello!” – and from that point onwards, it’s no longer a gadget. It’s a cat.

“Feeling the purr is really nice,” says Miriam Beames, who tells me that her beloved cat – Yum-Yum – died a year ago.

“For various reasons, I’ve thought I couldn’t get another one yet.”

The cat reacts to interaction via a series of fairly simplistic sensors across its body. A stroke of Alan’s back will make him purr, a tickle of the cheeks will provoke a miaow. If it gets dark, you’ll hear Alan yawn and nod off. The movements aren’t predictable, adding to its lifelikeness.

“We don’t think this is a replacement for a pet,” says Ted Fischer, vice-president of business development for Hasbro. And, incidentally, a man who is allergic to cats.

“What we’ve tried to create is this interactive companion which is familiar and has characteristics and is lifelike.”

As the world’s population ages, the business opportunity for Hasbro is enormous.

“We’re excited to make a commitment to this category. We’re going to watch how this goes and learn a lot.”
Medical need

And research suggests there is a real benefit to providing people with companion robots, particularly if they are suffering from dementia or Alzheimer’s.

Paro is a Japanese-designed robotic seal. It’s without question the cutest thing in the room when it’s on show at a tech shows, and great thought has gone into making Paro extremely lifelike and adorable. Even charging Paro is a delight – you plug him in popping a dummy into his mouth.

I bumped into Dr Takanori Shibata, Paro’s creator at the recent CES tech show in Las Vegas. He welcomed Hasbro’s efforts, but said the cat was “just a toy”.

Paro is in use around the world, including within Britain’s NHS. Discussions taking place later this year will look at expanding the number of Paros in UK hospitals and care homes.

And that’s because people are seeing real benefits from cuddling up to robotic companion pets – a sense of empowerment. For people who are being cared for 24 hours a day, being able to care for something themselves is invigorating.

“Our pet therapy dog can only work for a certain amount of the day,” says Dr Simon Davies from the Center for Addiction and Mental Health in California.

“And dogs do have more of a mind of their own than Paro. Dogs aren’t always going to get along with everyone – and not everyone is happy and comfortable with dogs.”
‘That’s an insult!’

Back at Lake Park and Alan the cat is now well at home – and he’s attracting a lot of attention.

As expected, he’s quickly become a talking point. People tell stories of cats they once had, or cats their family has now.

“A lot of our folks had a cat when they were younger, so there’s a relational memory,” says Hasbro’s Mr Fischer, adding that more animals will be developed, perhaps for dog lovers too.

Jim ponders whether the novelty would wear off pretty quickly, provoking a disgruntled “miaow!” from Alan.

“That’s an insult!” jokes Miriam, who insists Alan is, in fact, a girl cat.

It may seem slightly bonkers that anyone could have a real, human connection to what is essentially just a noisy bundle of electronics. But that’s missing the point.

Alan, and other robotic companions, are only daft to people who don’t have a need for them. For those who do, it’s a distraction, a friendly face, something that makes you – even if just momentarily – feel better.

The cat is still at Lake Park, and staff there later told me that, after a brief meeting, residents voted to call it Bingo – a girl.

Pro Fighting Factory Ghana Donates To The Elderly At La